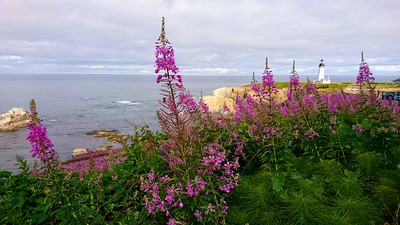 Where to Find Wildflowers in the Pacific Northwest

There is no shortage of natural beauty around the Pacific Northwest, but if you time it right, you might just be in for a real treat when wildflowers are in bloom. Usually between April to August, you can find fields of color if you know where to look. We’ve gathered a few of our favorites, but by no means a complete list. Grab your cameran and get out for a hike and see the world in bloom!

Between Olympia and Centralia, WA is a fascinating natural area set aside to showcase the pockmarked landscape. With regular spacing and all about the same height, they  become especially unique in mid Spring when the wild camas lilies form waves of light purple.

On multiple trails around the base of Mount Hood and even across the river at the old lava tubes, you can find creamy white popsicle flowers called bear grass. 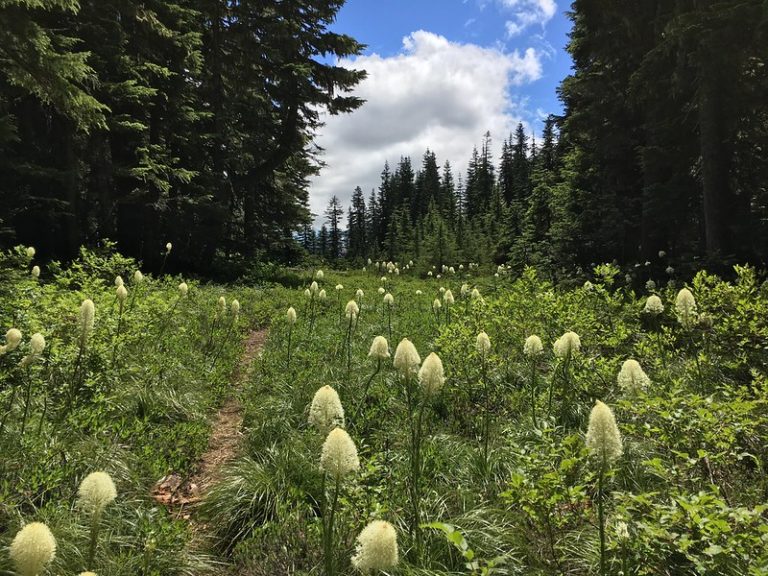 Beargrass flowers near Mt. Hood, Photo by US Forest Service

Hurricane Ridge Visitor Center is the main entrance for visitors heading out to explore the Olympic National Forest. The area is massive, and there are many different levels of hiking trails available. Stop in at the Visitor’s Center to pick up a guide and find out where the wild flowers are blooming right now. Not far from the Visitor’s Center between April and July you’ll find flowers without having to go too far. 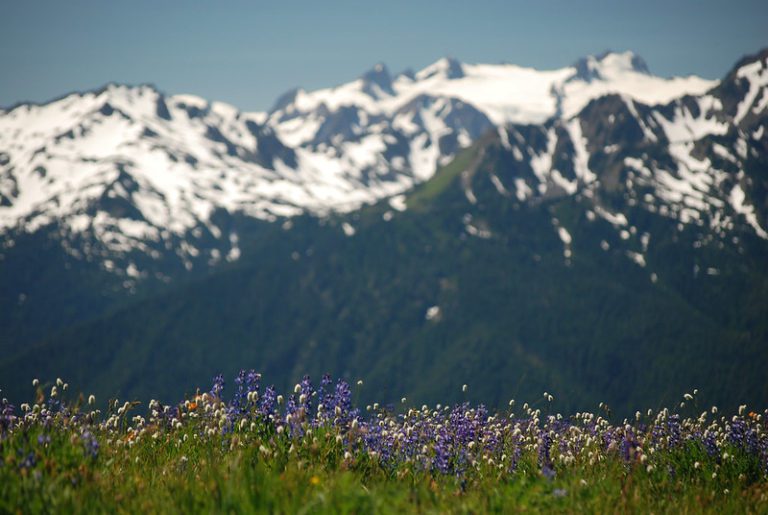 This former homestead is now a small park open for visitors to come and explore the native flowers, grasses, and wildlife. Located on the eastern edge of the Columbia River Gorge, you’ll also enjoy beautiful views. 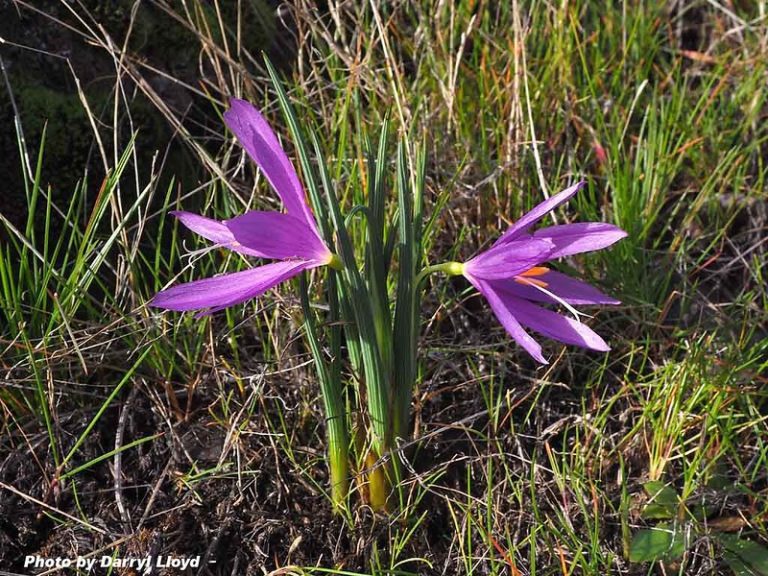 In Southwest Washington, there are two options for visiting Mount St. Helens. The Windy Ridge Interpretive Center is on a winding, nervewracking road that offers spectacular views if you aren’t afraid of heights. It is only open in the summers. Access is from the north end, through Randall.  The more frequented National visitor’s center is at the Johnston Ridge Observatory 50 miles east of Castle Rock. 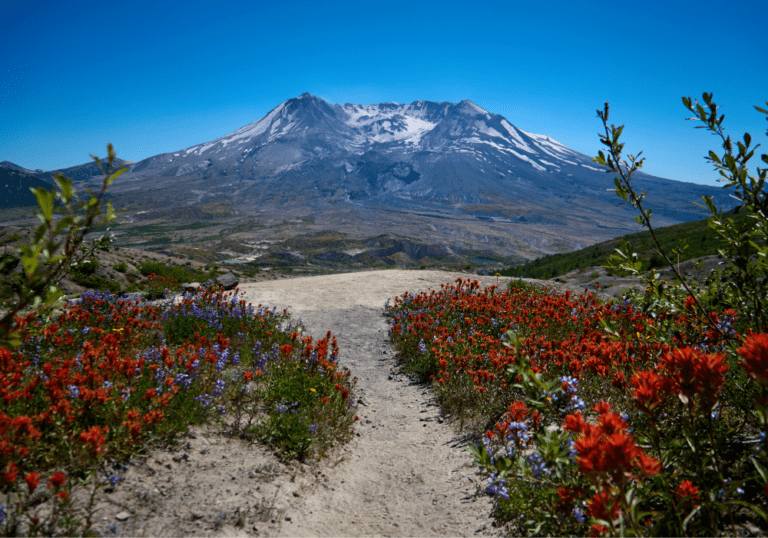 Along the Oregon coastline, you might happen up on swathes of pink clinging to the rocky outcrops. These tough flowers fight difficult conditions but make for stunning photos.  In summer, you’ll find fireweed – a dark pink 3-4′ tall flower that eventually gets large tufts of white seeds to set flight in the breeze. It can also be found inland. Earlier in spring, you might find tufts of medium pink ameria (thrift.) Standing just 6-8″ tall, these flowers can also be found on the rocky formations near Depoe Bay.

For those able to do the hike, there are several trails that skirt the top of the Columbia River Gorge, offering spectacular views and surprising hillsides covered with wildflowers. The Mosier Plateau Trail is a 3.5 mile hike with an elevation gain of 600 ft, but offering great rewards for those who can do it. Dog Mountain trail is labeled “Strenuous.” Before you head out on a hike, we recommend referring to the Friends of the Columbia River Gorge website to find the hike good for your level of fitness. 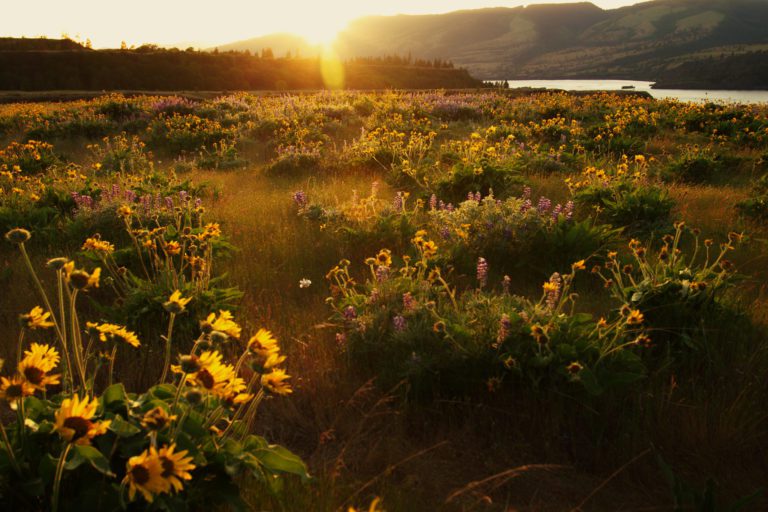 This little hidden gem is a 22 acre preserve in West Linn, Oregon just south of Portland with narrow walking trails allowing visitors to wander close to a native wildflower used by indigenous peoples of the Pacific Northwest for food. The beautiful blues and purples of camassia are best seen in late April and early May. 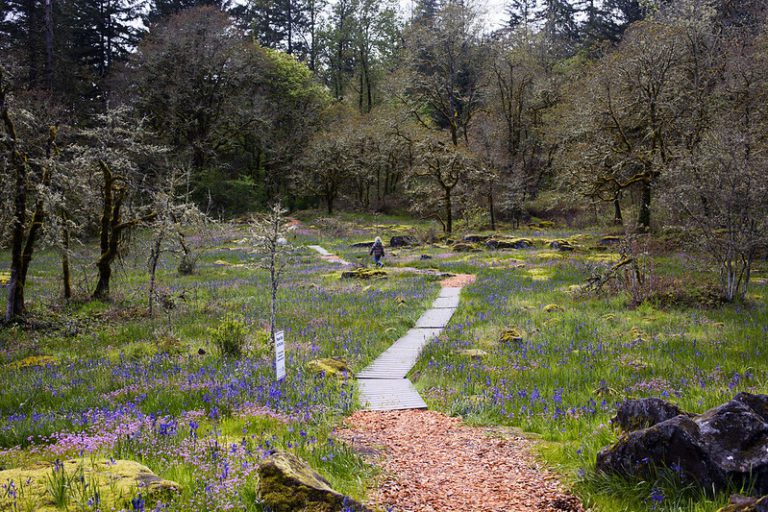 West of Salem, Oregon, this natural area has a looping trail through an oak forest and along open paths overlooking the Willamette Valley. In summer, you’ll come across several endangered wildflowers, butterflies, and birds. 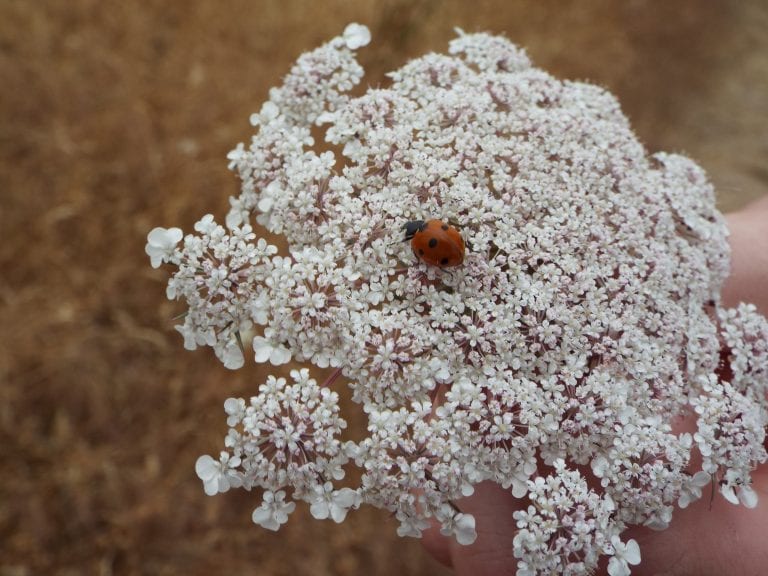 This urban park may be close to the city, but feels a world away. Located between south Portland and Lake Oswego, this natural park offers trails to hike for all levels, bridges, horse paths, and the chance to see trilliums in their natural habitat. 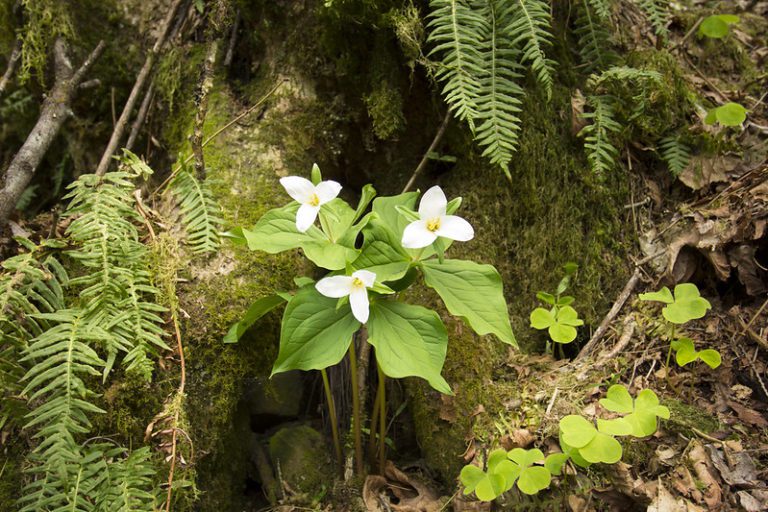 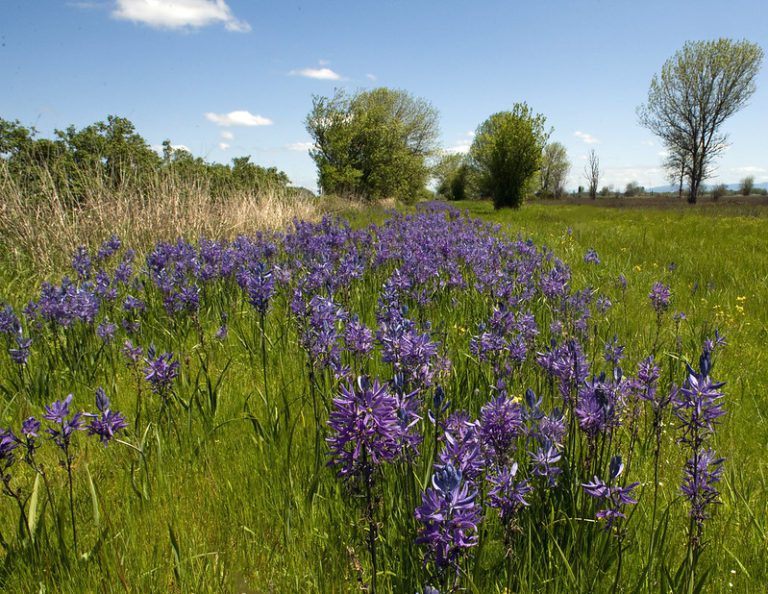 Flowers you’ll see: Head out in mid April to see the balsam root and lupines 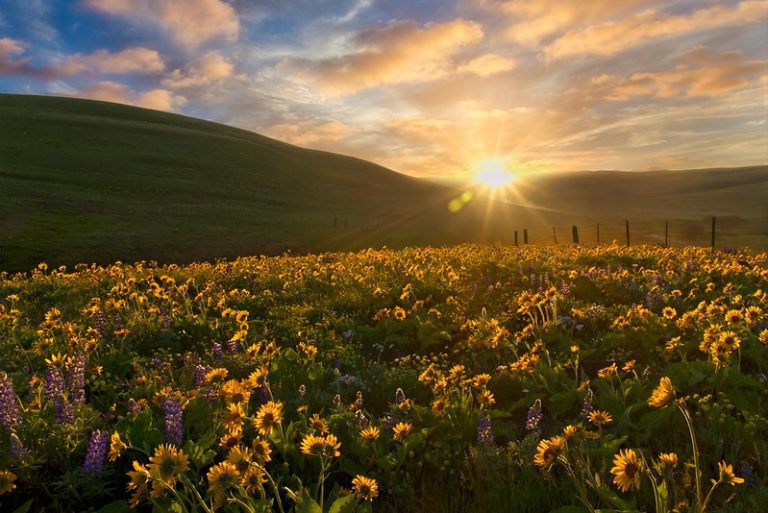 Wildflowers abound in this beautiful and extensive park. There are many trails to choose from, so we recommend checking in with the park’s website for clues as to which flowers are blooming and where. 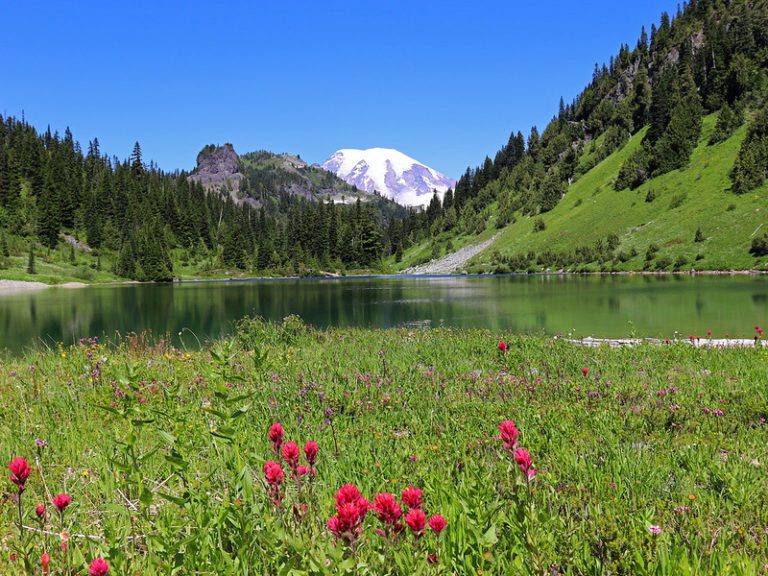 Get up to date info on which wildflowers are in bloom on OregonWildflowers.org 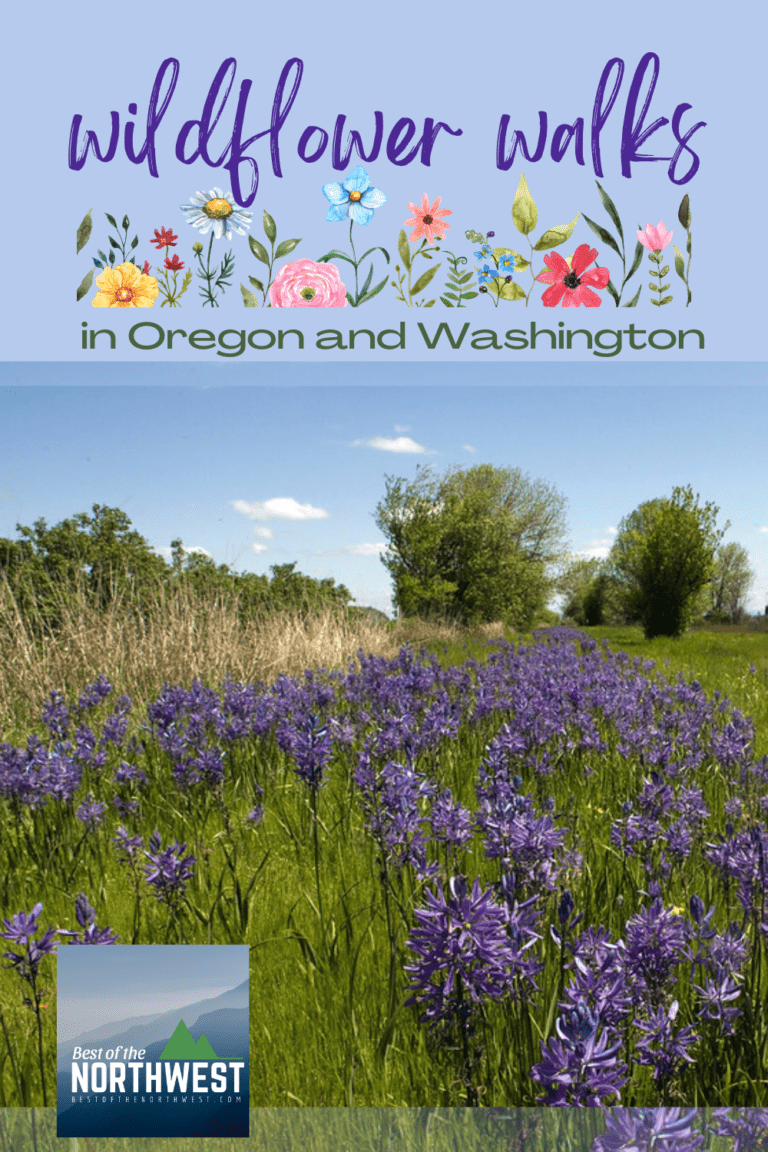 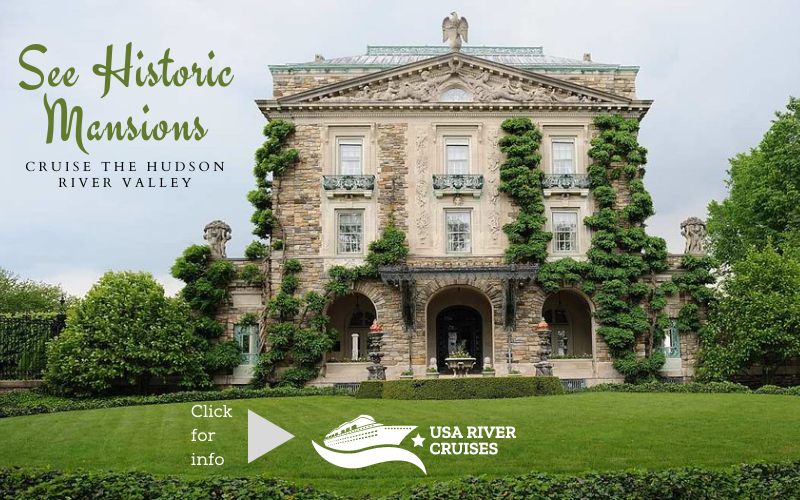 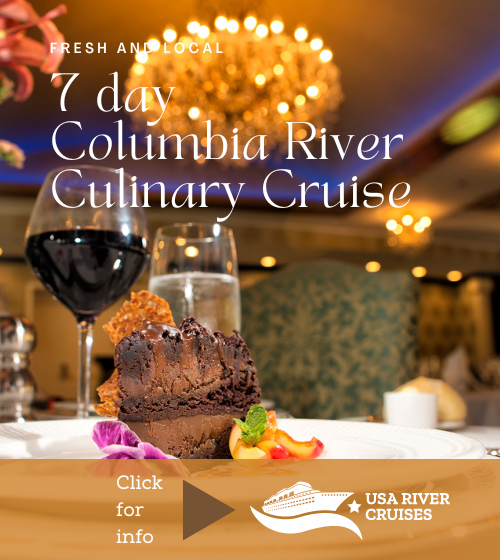