Books For Exploring the Pacific Northwest 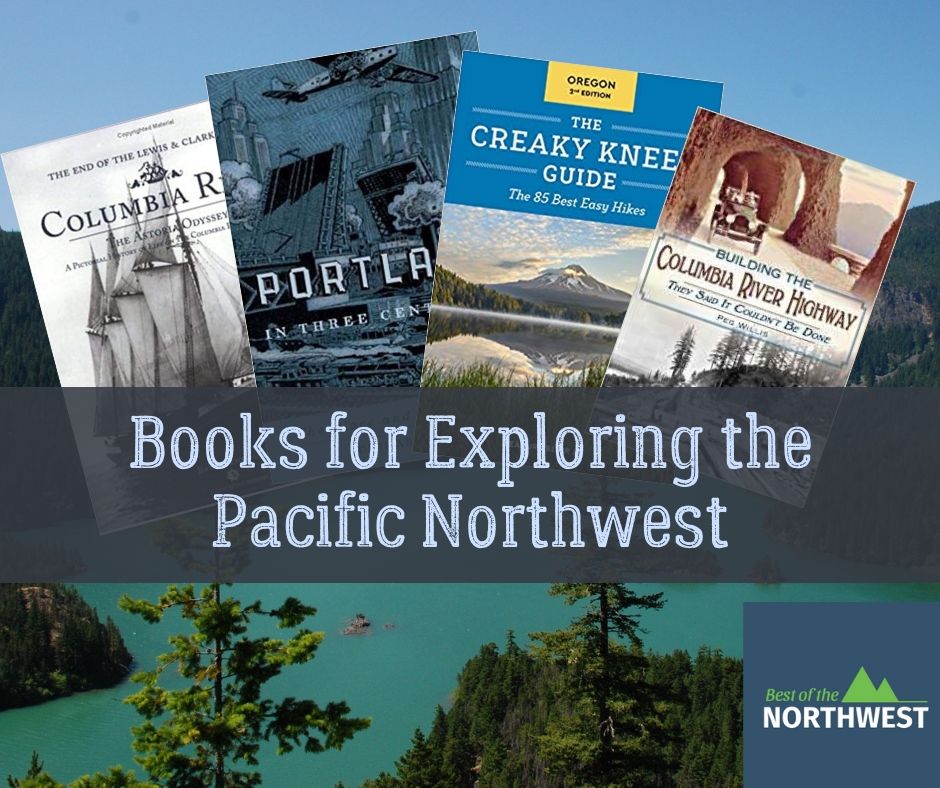 A comprehensive history of Portland – from the first settlers to the 21st century and what shaped Portland and its unique personality through political and social history. Buy on Amazon

50 Hikes with Kids in Oregon & Washington

Traveling with your children brings its own set of challenges, from planning to packing. It is so important to get children out in nature and there is so much to explore around the Pacific Northwest! This book has ideas on the best hikes to do with kids in tow. Buy on Amazon

Many Oregonians think of the Civil War as a faraway event or something that happens when the Ducks and the Beavers tangle. Few know that the state raised two Union regiments or that more than ten thousand Union and Confederate veterans made their way to Oregon after the war. In fact, the Beaver State has impressive Civil War ties. Buy on Amazon

Building the Columbia River Highway: They Said it Couldn’t Be Done

The historic Columbia River Highway heads east from Portland to the Dalles on the Oregon side of the Columbia River. What they created is a gem of the United States and a tribute to the inspired and amazing builders who created this treasure of a highway for us all to enjoy. Buy on Amazon

Lifting Oregon Out of the Mud: Building the Oregon Coast Highway

The mountainous and varied terrain of the Oregon coastline makes it very clear that those who took up the challenge to build a highway along the Pacific Ocean were incredibly brave and brilliant. Buy on Amazon

Hikes near Portland that can be enjoyed year-round. PDX Hiking 365 breaks through the fog to provide you fantastic hikes all year long, from January to December. Organized by month, 365 gives you ten great hikes for each month of the year. Buy on Amazon

Portland is home to a wide array of architectural styles and fabulous homes. Walk through the neighborhoods of Portland and discover the history, the stories, and the beautiful variety of architecture that has survived over a century. Buy on Amazon

Famous for the Oregon Shakespeare Festival, Ashland has a deep history that goes far beyond the stage. From a 160-year-old unsolved murder to a newcomer whose “healing hands” drew people from all over the country, the town has attracted its fair share of unique characters. Vladimir Nabokov came to pursue his favorite hobby, butterfly collecting, while writing his famously controversial novel, Lolita, and an actor turned entrepreneur became one of the foremost recyclers long before it was mainstream. Discover the story behind Ashland’s golf course cemetery and the gloveless baseball team of 1884. Join local historian Joe Peterson as he explores the fascinating past of this colorful town. Buy on Amazon

The thrilling, true-adventure tale of the 1810 Astor Expedition, an epic, now forgotten, three-year journey to forge an American empire on the Pacific Coast. Buy on Amazon

60 Hikes within 60 Miles of Portland

Within about a hour’s drive of Portland, you can have a variety of hikes both challenging and easy in the varied and stunning landscape of northwest Oregon. Buy on Amazon

60 Hikes within 60 Miles of Seattle

Located on the Puget Sound, 60 miles from Seattle in any direction can take you to amazing hikes in incredible places. Buy on Amazon

The Oregon Trail: Yesterday and Today

Not all hikes are created equally, and not all hikers are able to do the same hikes they used to. As we get a bit older, we still want to be out in nature, just a little easier on the old knees… Buy on Amazon

Where to go and what you’ll see when doing a day hike in the Columbia Gorge. There are many different hiking trails, all leading to quite different views, and of varying degrees of difficulty, but all reached round trip in one day or less. Buy on Amazon

The best sites to find natural hidden treasures in the spectacular landscape of Washington. Buy on Amazon

Exploring Washington state off the main highways. You can miss an awful lot by sticking to the freeways. Washington has so much to offer once you take the road less traveled. Buy on Amazon

Central Oregon has much to offer for day trips – and you can travel like a local if you follow a guide showing you the special spots within an hour or two from Bend. Buy on Amazon

Vancouver has a long history and has changed dramatically over 200 years. As you walk around downtown, it helps to have some perspective on what has changed – and what hasn’t over the years. Filled with photographs and stories, these series of books are a great way to learn local history and give meaning to what you see as you visit. Buy on Amazon

The dangers were real. The Pacific Northwest was the first line of defense in any potential invasion by Japan. The story of southwestern Washington and life during World War 2 is told by writer Kathy Hogan. Early in 1941 the Grays Harbor Post, in Aberdeen, Washington, introduced its readers to The Kitchen Critic, a new column chronicling life in nearby Cohassett Beach. By the end of the year the U.S. was at war, and columnist Kathy Hogan’s weekly dispatches turned to soldiers, rationing, and the barbed wire that lined the sand dunes around her weathered cottage. Buy on Amazon

In Seattle Walks, David B. Williams weaves together the history, natural history, and architecture of Seattle to paint a complex, nuanced, and fascinating story. He shows us Seattle in a new light and gives us an appreciation of how the city has changed over time, how the past has influenced the present, and how nature is all around us―even in our urban landscape. Buy on Amazon

Portland Then and Now

Pairing historic photographs with specially commissioned views of the same scenes as they look today. The book traces the evolution of Portland from the early years of photography to the present, showing how it became Oregon’s largest and most vibrant city Buy on Amazon

Filled with over 320 pages, over 137 of rare and historic photographs, 23 rare and one of a kind historic mining documents, complete with exact GPS locations, and 25 adventure stories. Buy on Amazon

Abandoned Oregon: Ghost Towns of the Painted Hills and Beyond

Abandoned Oregon: Ghost Towns of the Painted Hills and Beyond combines the author’s penchant for aimless road trips, foolhardy adventure seeking, and paranormal curiosity and offers it all up in four variations on a weekend getaway through central Oregon. Buy on Amazon

Little Washington presents 100 of the state’s tiniest towns. With populations under 3,500, these charming and unique locations dot the entire state―from Neah Bay along the Northwest coast to LaCrosse, a farming community in the eastern county of Whitman. With full-color photographs, fun facts, and fascinating details about every locale, it’s almost as if you’re walking down Main Street, waving hello to folks who know all of their neighbors.

Discover astonishing rocks and landforms in the Beaver State with a guide to 60 of the most compelling geologic sites in the state. The well-chosen destinations span the state’s geologic history from the Triassic marble at Oregon Caves to the 240-year-old lava dome on Mt. Hood. With more active volcanoes than any other state in the Lower Forty-Eight, Oregon boasts towering behemoths, steaming fumaroles, and eroding cinder cones. Geologist Marli Miller will guide you through the ash and lava to discover the unique Oregon landscape. Buy on Amazon