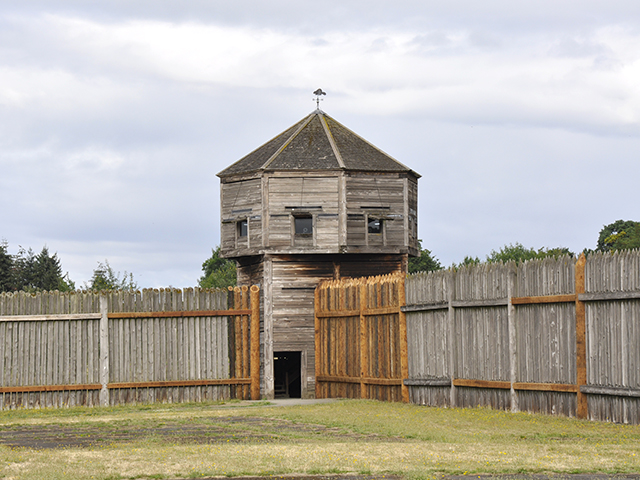 The history of the Oregon and Washington Territories is tied into American history dating back to even before the moment Thomas Jefferson create the Corps of Discovery and sent Lewis and Clark on an expedition to see if there was an easy route to get from shore to shore.  The desire to take advantage of the natural resources found in the Pacific Northwest was strong.

The 19th century would see dramatic changes to the Native American’s world and the natural world with the ever increasing number of immigrants looking to settle here.  It began as explorers discovered the great source of riches to be had in furs to be shipped around the world for profit. They built forts to use as trading outposts and provide supplies for fur traders. The ample lumber, fishing, and farmland lured more and more people to the mild climate of the Northwest.  Resulting conflicts with the Native American tribes were to be expected.  American military forts were needed to provide a safety net for the new American settlers.

By the end of the 19th century, most forts were no longer needed as the Oregon Territory and Washington Territory became U.S. states in their own right, and the people who followed the Oregon Trail were successful in colonizing the Pacific Northwest.  Most forts either deteriorated, or were sold off as they became unnecessary to maintain. Many have been recreated, refurbished, or are currently archeological sites. They all have their own fascinating history and their own unique stories to tell and are well worth a visit.

Fort Clatsop was the winter encampment site of the Corps of Discovery, also called the Lewis & Clark Expedition. Having reached the Pacific Ocean in the fall of 1805, they chose to stay the winter near the mouth of the Columbia River near what would become Astoria, Oregon before beginning their return journey. They named the fort after the local native tribe, the Clatsop. When they left, the fort was given over to the tribe. By 1850 there was little to be seen of the old fort. The Oregon Historical Society acquired the site in 1901. A replica of the fort was built based on drawings of Meriwether Lewis in celebration of the 1955 sesquicentennial of the Lewis & Clark Expedition and was donated to the federal government soon after. The replica was severely damaged in an accidental fire in 2005. A more realistic replica was rebuilt and dedicated in 2006 and is now operated by the National Park Service.

Fort Vancouver was a fur trading post built in 1824 for the Hudson’s Bay Company. It was the headquarters and supply depot for areas west of the Rocky Mountains. Named for Captain George Vancouver, the fort was located on the northern bank of the Columbia River in present-day Vancouver, Washington. It also was a source of supplies for new immigrants arriving on the Oregon Trail. Now a national historic site, the fort is part of an extensive 366 acre reserve that includes historically significant nearby sites such as Vancouver Barracks, Officer’s Row, and Pearson Airfield. Outside the fort is an historically recreated kitchen garden, and a “Confluence” bridge that visitors can walk towards the Columbia River, crossing over the 20th century additions of Highway 14 and railroad tracks, connecting the Fort to the river as it once was. Within the fort’s walls are a variety of buildings including a kitchen, forge, storehouse, and living quarters. Guided tours available; special events include lantern light night tours, Christmas events, and living history reenactments.

Fort Flagler State Park is a 1,41 acre public recreation area that occupies the site of Fort Flagler, a former United States Army fort at the northern end of Marrowstone Island in Washington.  The fort, along with the heavy batteries of Fort Worden and Fort Casey, once guarded the nautical entrance to Puget Sound. These posts, established in the late 1890s, protected such targets as the Bremerton Naval Yard and the cities of Seattle, Tacoma, and Everett until closed in 1953. The property was purchased as a state park in 1955. The group of forts once known as the “Triangle of Fire” (made up of Fort Flagler, Fort Worden and Fort Casey) is a must-see for military, armament, and maritime enthusiasts.

Fort Nisqually was an important fur trading and farming post of the Hudson’s Bay Company in the Puget Sound area, part of the Hudson’s Bay Company’s Columbia Department. Established in 1833, Hudson’s Bay Company eventually sold the fort and surrounding farmable land to the United States in 1869. It was located in what is now DuPont, Washington near Tacoma.  The fort was reconstructed in the 1930s and is now a living history museum and part of the Tacoma metropolitan parks department.  The museum gives residents and visitors a chance to experience what life was like on Puget Sound in 1855 with many reenactments, workshops, and events year-round.

Fort Okanogan was founded in 1811 on the confluence of the Okanogan and Columbia Rivers as a fur trade outpost by the Pacific Fur Company. It was the first American-owned settlement within Washington State, located in what is now Okanogan County. The site is now a small museum and interpretive center run by the Colville Confederated Tribes. Fort Okanogan State Park is 45-acre day-use park set on a bluff overlooking the Columbia River. In 1821, the fort was purchased by the Hudson Bay Company. Open Tues-Sun 9:00 am – 4:30 pm Memorial Day – end of September. Closed in winter months.

Fort Simcoe was a United States Army fort erected in 1856 in the south-central Washington Territory to house troops sent to keep watch over local Indian tribes.  Located on what is now the Yakama Indian Reservation, it sits on 140 acres in what feels like the remote wild west. Fort Simcoe’s military history was short-livedand closed as a fort in 1859. The site was handed to the Bureau of Indian Affairs, under which it became a boarding school for Yakama children. A visit now will show elegant officers’ homes, blockhouse, a jail, restored barracks, an interpretive center, and Commander’s quarters. The 196 acre day use site  is on the National Register of Historic Places and is on lease to the Washington State Parks to aid in historic preservation. The interpretive center and the Commander’s Quarters are open for tours from April 1 to Oct. 31, from 1-4 p.m. on Saturdays. Tours at other times must be made by appointment in advance. A Washington State Park Discover Pass is required for entry year-round.

Fort Steilacoom is a history museum where guests of all ages can explore military life of enlisted soldiers, officers, the families of soldiers, civilians that worked for the garrison and those that visited from the community. The fort played a significant role in the settling of Washington Territory. Beginning with its establishment in 1849 and ending with its closure in 1868, promoting the migration of settlers to Washington & securing American interest in the region. Located in the south Puget Sound, Fort Steilacoom was a part of an early network of settlements including Forts, Camps and Military Posts which were owned by either the United States or the Hudson’s Bay Company. A visit now will find many refurbished buildings, living history reenactments, lectures, tours, and more. Open Sundays 1-4pm Memorial Day through Labor Day and every first Sunday in winter. $5 admission for guided tours, free admission to the interpretive center.

Fort Walla Walla is a United States Army fort located in Walla Walla, Washington. The first Fort Walla Walla was established 1856 as a military fort. Located on 179 acres, the museum provides an exciting and educational experience for the whole family. The museum features a 17-building historic pioneer village, gardens, and five sprawling exhibit halls housing museum artifacts including wagons, horse-drawn agricultural equipment, and carriages, indian artifacts, textiles, and military artifacts. There are special programs and events held on the Museum grounds all year.  Open all year round.  Admission $9 adults with discounts available.

Fort Astoria was the primary fur trading post of John Jacob Astor’s Pacific Fur Company. It’s long and troubled history includes being established in 1811 as an American fort. In 1813 it was sold to the British and renamed Fort George. After the War of 1812 ended, it be came joint possession of both England and the United States.  Around 1818 it was renamed again as Fort Astoria. In 1846 it was once again U.S. property until abandoned in 1925.  The City of Astoria literally grew up around it and on top of it . In 1962 the site became a Designated Registered National Historic Landmark. Today, you can see the outline of the fort by way of green lines painted on the streets to show the boundaries of the original settlement, and a small recreation of parts of the post in a corner park. There is no entrance fee.

Fort Spokane was established as a U.S. Army frontier outpost in eastern Washington in 1880. Located on a distant bluff about 50 miles west of what is now the city of Spokane, the fort was used to house military personnel and separate local native american tribes from the new white settlers. The fort overlooks a strategic spot at the historic fishing grounds at the confluence of two rivers.  The military fort was closed in 1898 and the buildings were used as an Indian boarding school and a tuberculosis hospital.  When the Grand Coulee Dam was built between 1933 and 1942, what became Lake Roosevelt obscured the fishing grounds and only a few of the original structures remain.  You can still see the original Quartermaster’s stables and the guardhouse, as well as outlines of old training grounds and building outlines. What is left has been turned into a visitor center and museum containing military artifacts, photographs, and historical information on the native american experience.  Open summer months only. Free admission.

Fort Umpqua was a trading post built by the Hudson’s Bay Company in their southernmost area on the Umpqua river in southern Oregon.  The fort was first established in 1832, moved and rebuilt in 1836. The fort was destroyed in a fire in 1851 and closed for  good a few years later. Today’s replica was created a mile downstream and has evolved into an active community center and living history museum. On site you will find a cafe, butterfly pavilion, gardens, art displays, and a fort replica including 12′ high stockade walls, a trade building, men’s quarters, and cook shack.  Open Memorial Day through Labor Day 7 days a week, and weekdays the rest of the year.

Fort Yamhill was an American military fortification built in 1856 in the Oregon Territory. It remained an active post until 1866. The Army outpost acted as a buffer and eased tensions between Native Americans and white settlers. Originally, the fort contained about 80 men, 4 officers, and 24 buildings. At the outbreak of the Civil War, the military soldiers were sent back east and the fort continued to be run by volunteer soldiers. The fort was home to several officers who went on to serve in the Civil War, including Generals Philip Sheridan, Joseph Hooker, Joseph Wheeler, and David Allen Russell. At the end of the Civil War, the fort was abandoned and most buildings were auctioned off.  In 1911, the blockhouse of the fort was moved to a park in downtown Dayton to honor a city founder. The actual site of the fort grounds, which is in the area of the town of Willamina, has been listed on the National Register of Historic Places since 1971.  The only remaining building to be seen is a relocated Officer’s Quarters building. Archaeologically, it is one of the best preserved forts in the Northwest from this period. Even though the buildings are gone, the “footprint” of the fort is still intact and beautifully preserved. The Oregon Parks Department has plans to reconstruct some of the fort buildings.  It is currently a State Heritage Area and park. No admission fee.