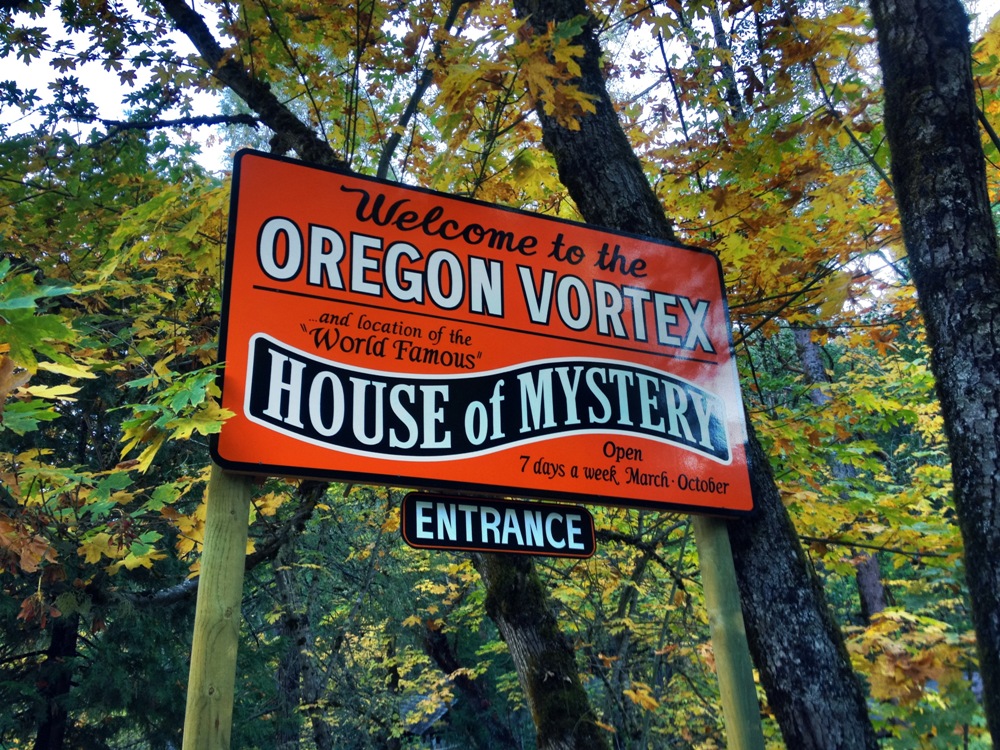 Located just northwest of Medford in southern Oregon, this kitschy pit stop for road trippers is an intriguing spot where brooms stand on end, tennis balls roll uphill, and visitors experience the phenomenon of “height change,” appearing to grow and shrink once inside. Open to the public since 1930 as the “House of Mystery,” it’s also reportedly been plagued by supernatural energies for decades. 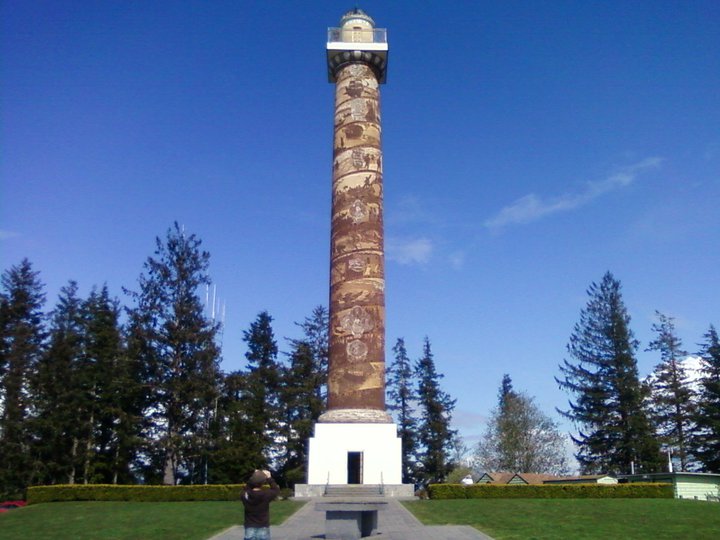 Astoria, one of Oregon’s most historic cities, is famous for its magnificent Victorian-style architecture with the brightly colored homes scattered among steep hills, as well as for being the setting for 1985’s cult classic, “The Goonies.” For the very best views of the town, the river, snow-covered volcanoes of the Cascades and beyond, head to the Astoria Column, an iconic landmark on Coxcomb Hill. Join in on local tradition by picking up a balsa wood airplane at the gift shop and launching it from the top. 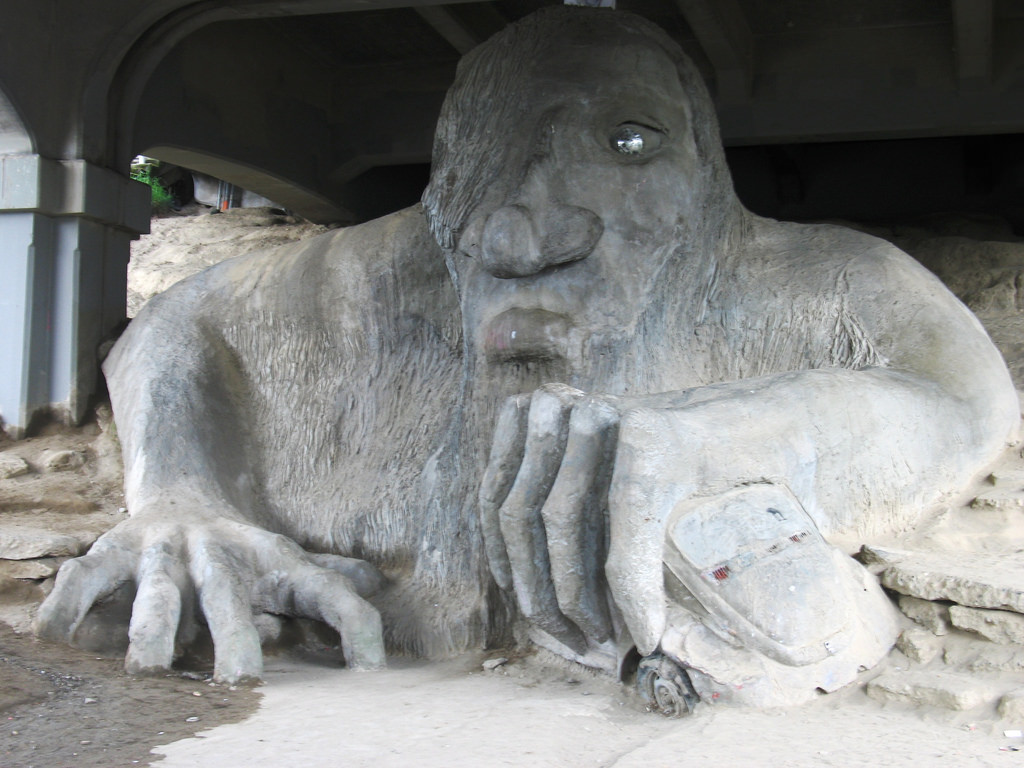 Set in the Fremont neighborhood of Seattle, the Fremont Troll offers the opportunity for the ultimate Emerald City selfie. The 18-foot-tall troll lives under the Aurora Bridge, and tightly clutches onto a Volkswagen Bug. Constructed in 1990, the gigantic sculpture was built with concrete, wire and steel, while a hubcap serves as his one good eye. It was submitted for a competition aimed to promote urban renewal, though the judges dismissed it initially, calling it a “hideous fiend.” But in the end, thanks to local appreciation, the troll won the right to lurk in the space under the bridge for all eternity. 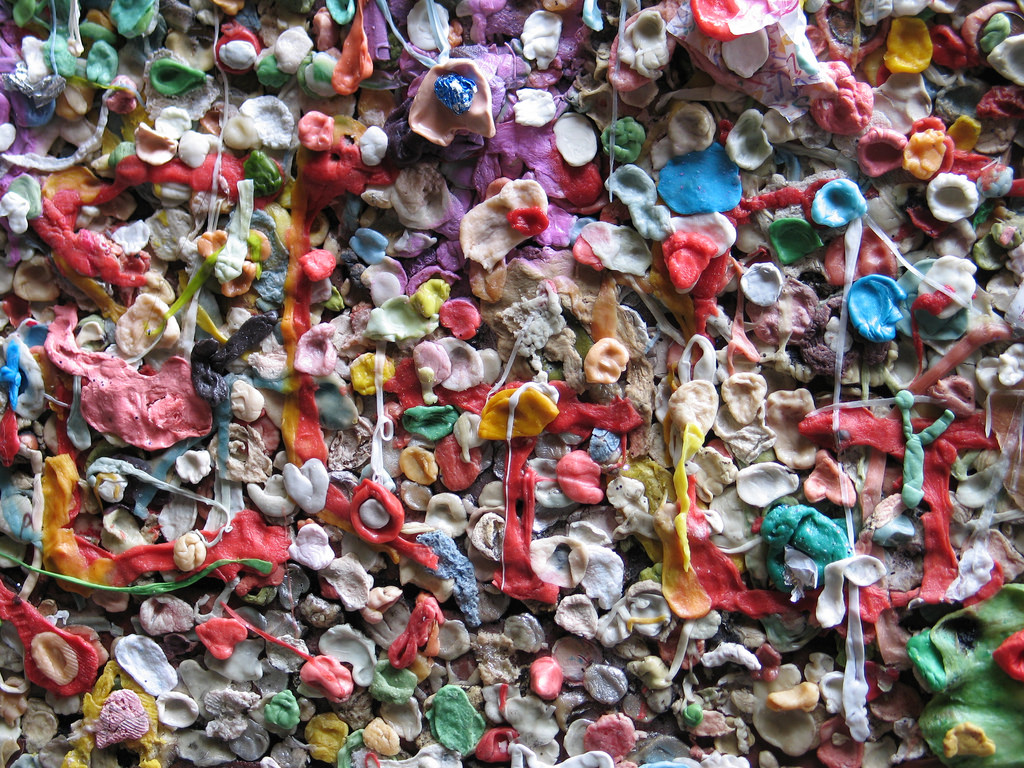 TripAdvisor called the Market Theater Gum Wall the world’s second “germiest” tourist attraction in 2009. As Ireland’s Blarney Stone was the No. 1 germiest attraction, you’d have to cross the Big Pond to experience it, so you might as well check out the second best while you’re in the Northwest. This local landmark in downtown Seattle has been collecting gum, along with plenty of germs, for over two decades now. It all began when those waiting in line at the Market Theater box office began sticking their gum on the wall. Some of those theatergoers even went as far as transforming their discarded wads into sculptures. The gum was continuously cleaned off the wall, but it kept returning, again and again, so eventually, the city decided to embrace it rather than fight it, turning it into official Seattle attraction.

If you’ve been dreaming about visiting Middle Earth but haven’t been able to make it all the way to New Zealand, check out Brothers Greenhouses which features an earthen building that resembles a hobbit home. It’s all part of a beautiful nursery and fantasyland of ferry gardens, complete with a magnificently carved castle too. 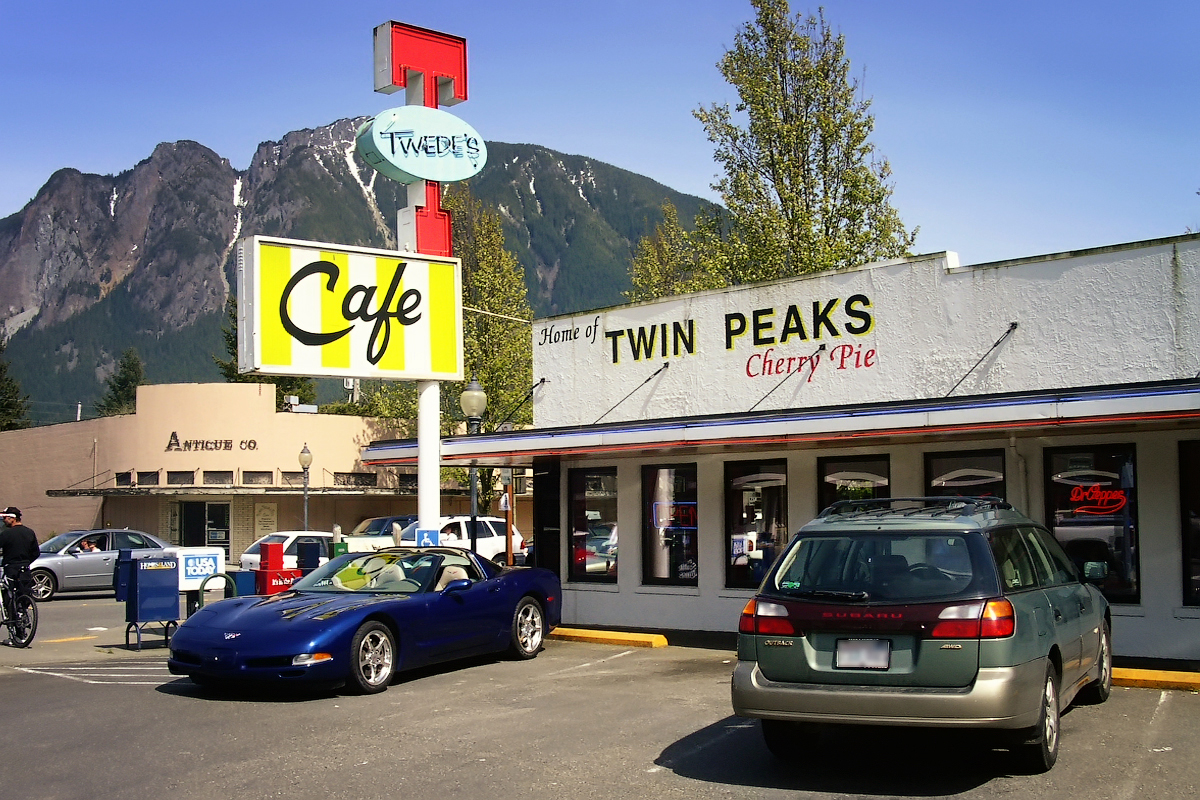 Originally known as the Mar T café, Twede’s may look like an ordinary coffee house, but step inside and you’ll recognize it as the very same café from the still very popular, bizarre show, “Twin Peaks.” While the owners may have changed, it still has the distinctive “T” sign, and offers a heavenly slice of Twin Peaks cherry pie too. 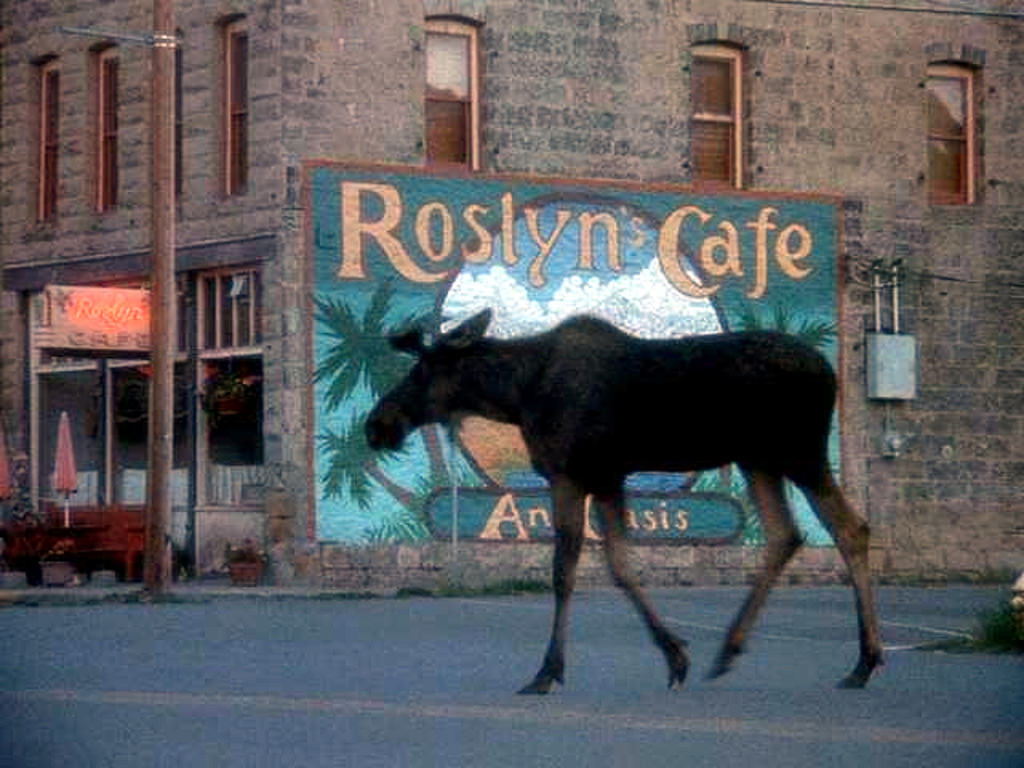 The tiny town of Roslyn, located in the Central Cascades, served as the fictional town of Cicely, Alaska in the quirky 1990s’ television series, “Northern Exposure.” While it’s been off the air for years now, fans still arrive in droves to check out Ruth-Anne’s general store, KBHR radio station where Chris spun his tunes, and the camel mural on Roslyn’s café. Talk to any one of the locals, and you’re likely to hear a story about the actors and the show that put this charming mountain town in the spotlight. 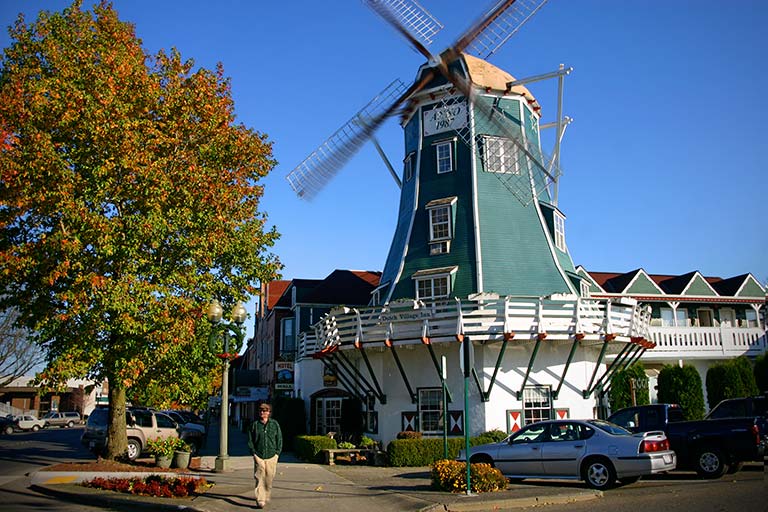 Right in the heart of Lynden, a Dutch-influenced hamlet just minutes from the Canadian border, is the Lynden Dutch Village, marked by its famous working four-story windmill. The village also boasts a sidewalk café, interesting shops and a 150-foot canal filled with fountains and fish. 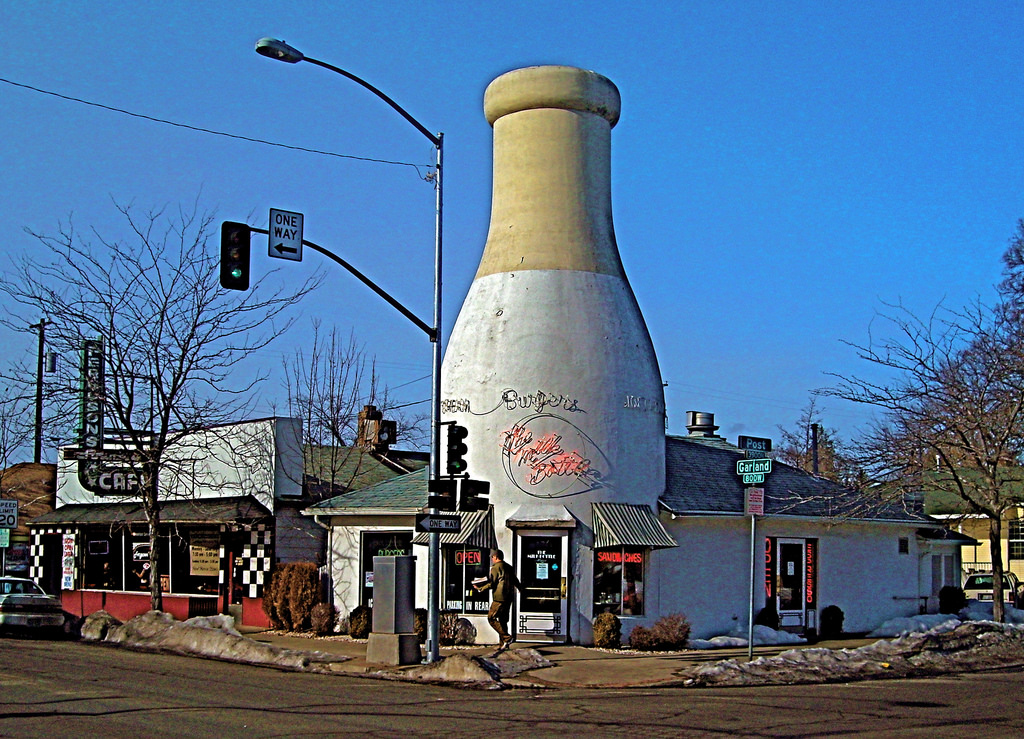 This unusual, iconic diner is one of Spokane’s most beloved. Set within a two-story milk bottle, the architecture will not only make you stop and look twice, but its menu of classic 1950s-style burgers, fries and creamy milkshakes using homemade ice cream will entice you to stay awhile. Its retro throwback feel also appeals to fans of film, pop culture and Johnny Depp as it was featured in a scene from the 1993 film, “Bonny & Joon,” when Depp’s character managed to make the rolls dance. 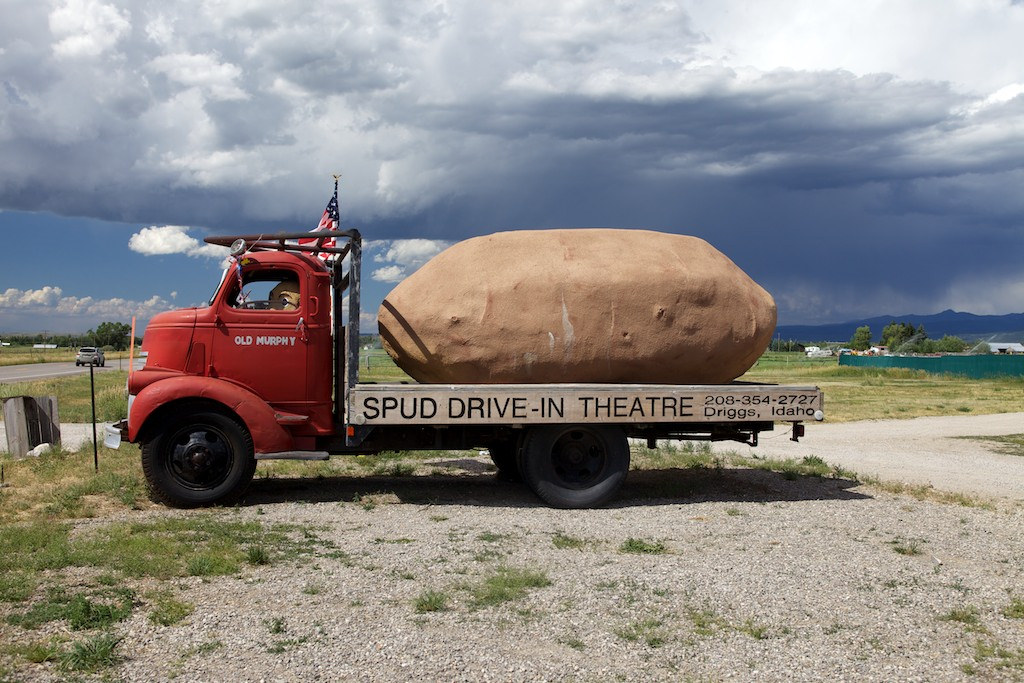 Named one of TIME magazine’s Top 50 American Roadside Attractions, the Spud Drive-In Theater is home to the world’s largest potato. Not only can you enjoy fantastic flicks old-school style, but you can have your picture taken in front of the massive concrete-filled spud that sits in the back of “Old Murphy,” a 1946 Chevy truck. 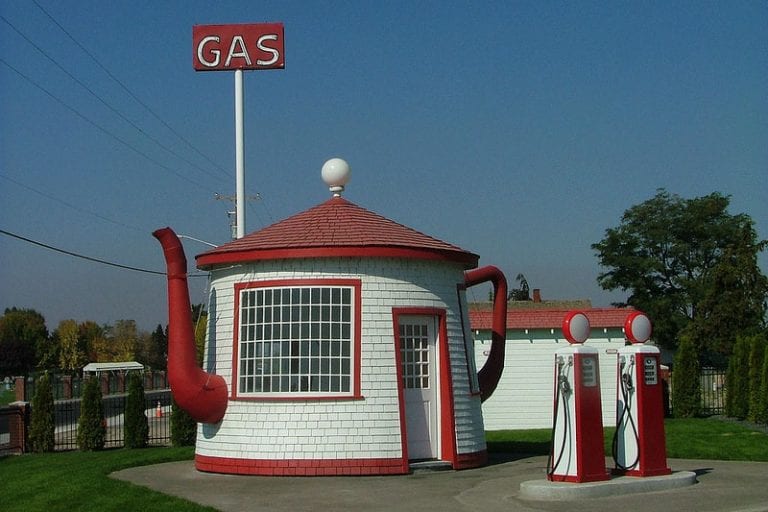 In Zillah, Washington you may not be able to stop for a spot of tea, but you can see one of the largest teapots around.  This unique roadside attraction was built in 1922 not for purely commercial reasons, but in response to the Teapot Dome political scandal. Now on the National Historical Register, the teapot now serves as a tourist information center. Now, would you like one lump or two? 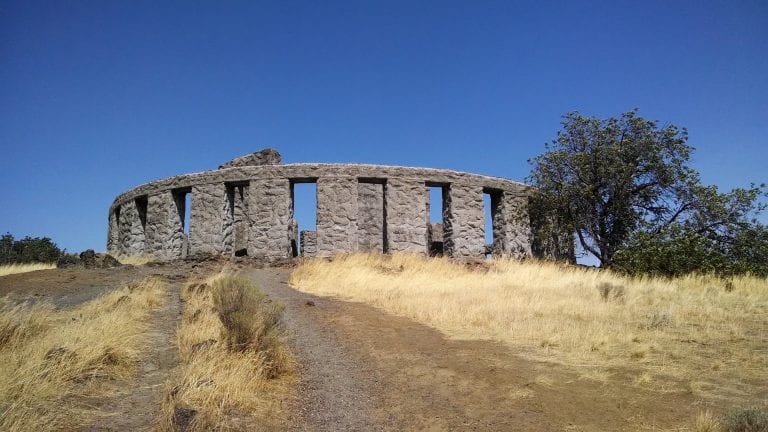 Just off SR14 in Washington overlooking the Columbia River, you can find a replica of the world famous Stonehenge.  On top of a steep bluff in southern Washington seems an odd place to find an ancient British circle, which makes this a unique roadside attraction.  This full size replica of what Stonehenge possibly looked like when it was first built in Neolithic times, was built here by the owner and builder Sam Hill, who also built what is now the Maryhill Museum next door. Sam Hill had the memorial built in 1918 as a memorial at the end of World War 1.  Admission is free. 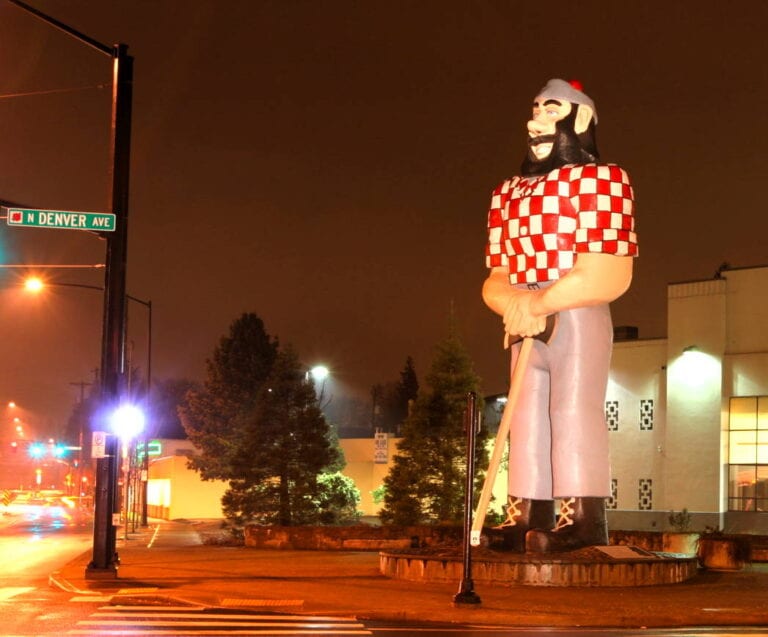 The Paul Bunyan Statue is a lesser known icon of Portland, Oregon. This unusual statue of the mythic folk hero Paul Bunyan is now on the National Historic Register. The statue was built in 1959 to commemorate the state’s 100th birthday and celebrate its long history in forestry. Located on N. Denver Avenue and Interstate Avenue.  No known sightings of his big blue ox have been reported.