Best of the Northwest Lighthouses

A trip down the Northwest Coast’s Highway 101 isn’t complete without stopping to view its historic lighthouses. Most of them are recognizable from far away, but you should definitively consider a detour to visit the sites, climb its towers, learn the history about lighthouse keepers and their families, and even to experience how it is to sleep in some of the most remote locations with an exceptional view!

Check out our picks of the best lighthouses on Oregon’s and Washington’s coastline and take some great pictures of these iconic structures. 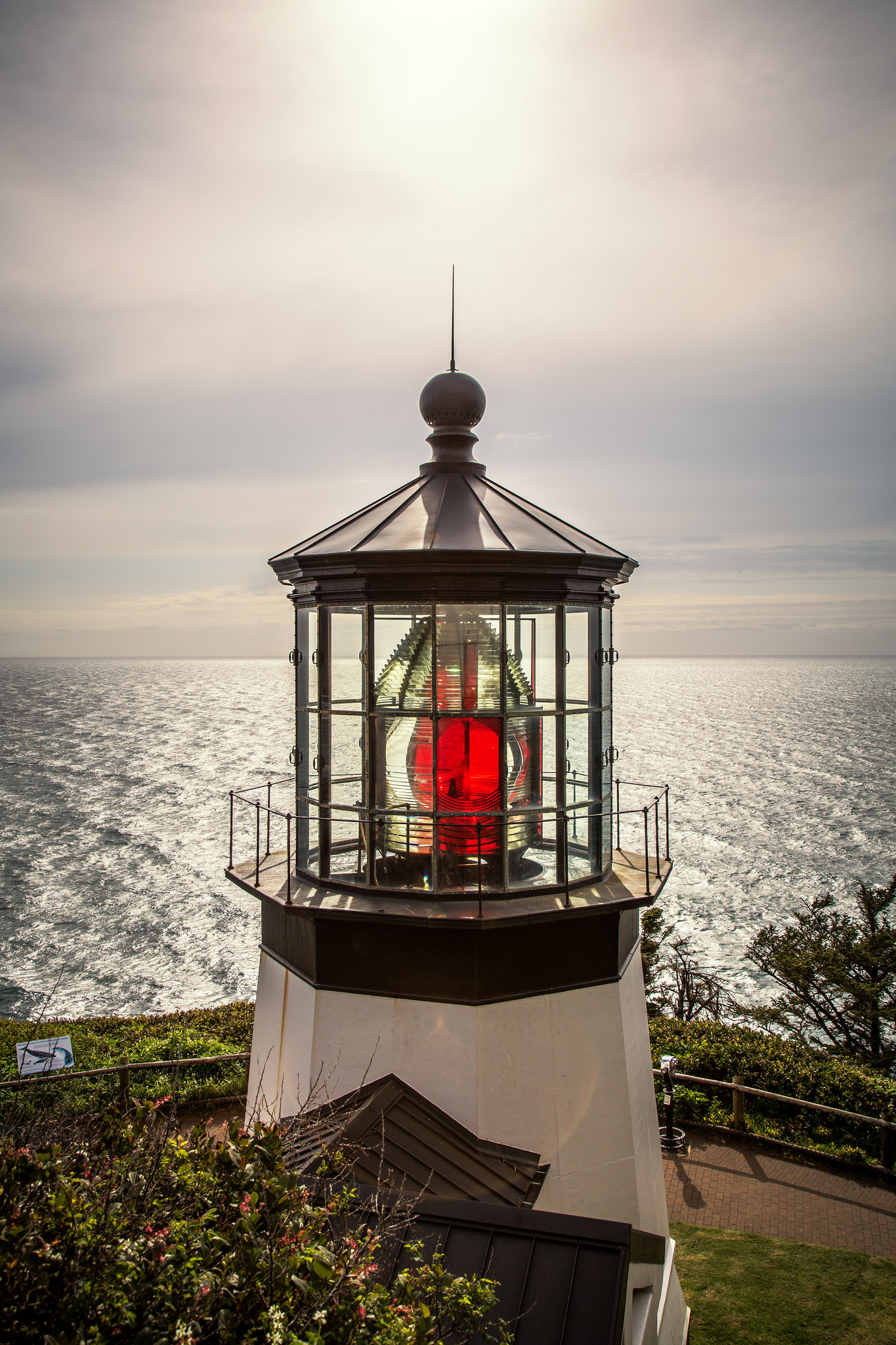 At 10 miles west of Tillamook, in the Cape Lookout State Park, you find the shortest lighthouse on the Oregon coast, Cape Meares. The lighthouse that was built in 1890 is no longer in use, but still houses its original Fresnel lens. In this area, you’ll find some beautiful viewpoints for whale watching. Don’t forget to take a short walk to the park to see the famous Octopus Tree and when you have more time, take the car and tour the 40 mile Three Capes Scenic Loop, one of the most popular and spectacular stretches of scenery on the Oregon Coast. Three miles north of Newport, located in the Yaquina Head Outstanding Natural Area, rises the tallest lighthouse in Oregon, Yaquina Head Lighthouse. It took about a year to construct this lighthouse that is built with 370,000 bricks. Since its beginning in 1872, wind and rain have hit this lighthouse, that still is in use. Take advantage of exploring the area or walk down to the rocky beach to listen to the waves crashing over the pebbles.

People believed that this lighthouse was haunted and that if a ship passes close by, the compasses go out of control. The truth, however, is that the land where the lighthouse sits is housing magnetized iron, known to throw off readings. With its red roof and glorious views, Heceta Head is the most photographed lighthouse on the Oregon coast. Situated in the Hecta Head Lighthouse State Park, 12 miles north of Florence, this lighthouse features the brightest light of Oregon’s coastline, shining out 22 miles into the sea. If you don’t want to leave the spectacular scene you don’t have to: the former house of the lighthouse assistant is now a charming bed and breakfast that can accommodate 15 guests and can arrange tours of the lighthouse too. Here you can relax at an original handcrafted fireplace with fantastic ocean views in absolute privacy. Umpqua River Lighthouse, located south of Reedsport in the Umpqua River State Park, was the first lighthouse on the Oregon Coast.

The Umpqua River Lighthouse and its museum provide a unique experience for those interested in lighthouses, their history and how they work. For a small donation volunteers take small groups to the lighthouse for a tour that includes the climb to the top of the 65-foot lighthouse, where you can look inside the working light.

This lighthouse is worth visiting twice: During the day to take great pictures of this historic icon and its surroundings and at night to watch the impressive, powerful light illuminating the dunes and sea, which is a truly spectacular experience! 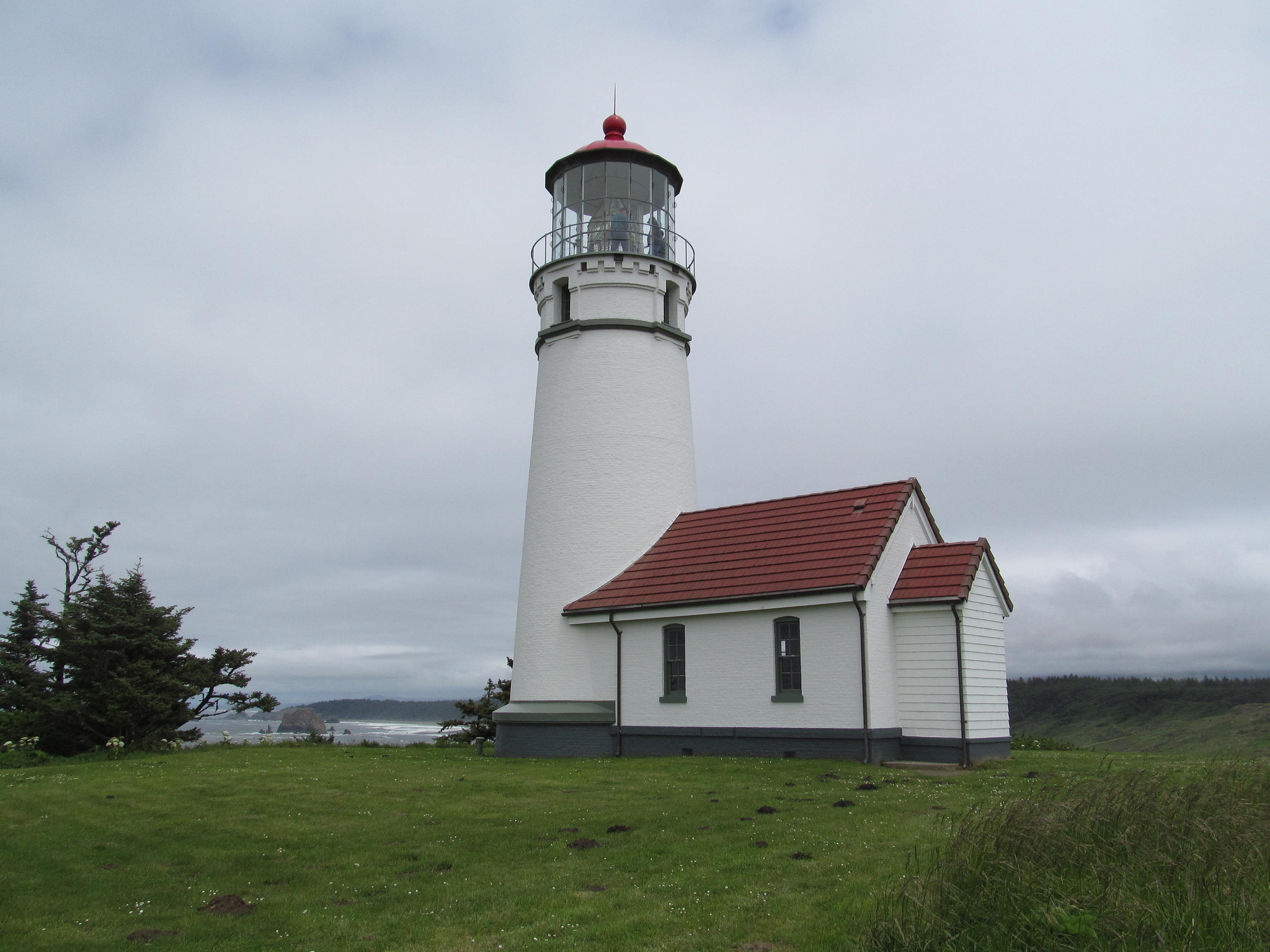 Cape Blanco Lighthouse, situated in Cape Blanco State Park, is Oregon’s oldest operating lighthouse. Located nine miles north of Port Orford, on the most westerly point of the state, Cape Blanco Lighthouse is an ideal spot for beautiful ocean views and whale watching. The lighthouse was built in 1870 and operated by two innkeepers who both worked here for their entire careers, which was an incredible achievement considering its remote position.

Take the time to tour the keepers’ Victorian-style house and to learn more about how life was on the lighthouse. 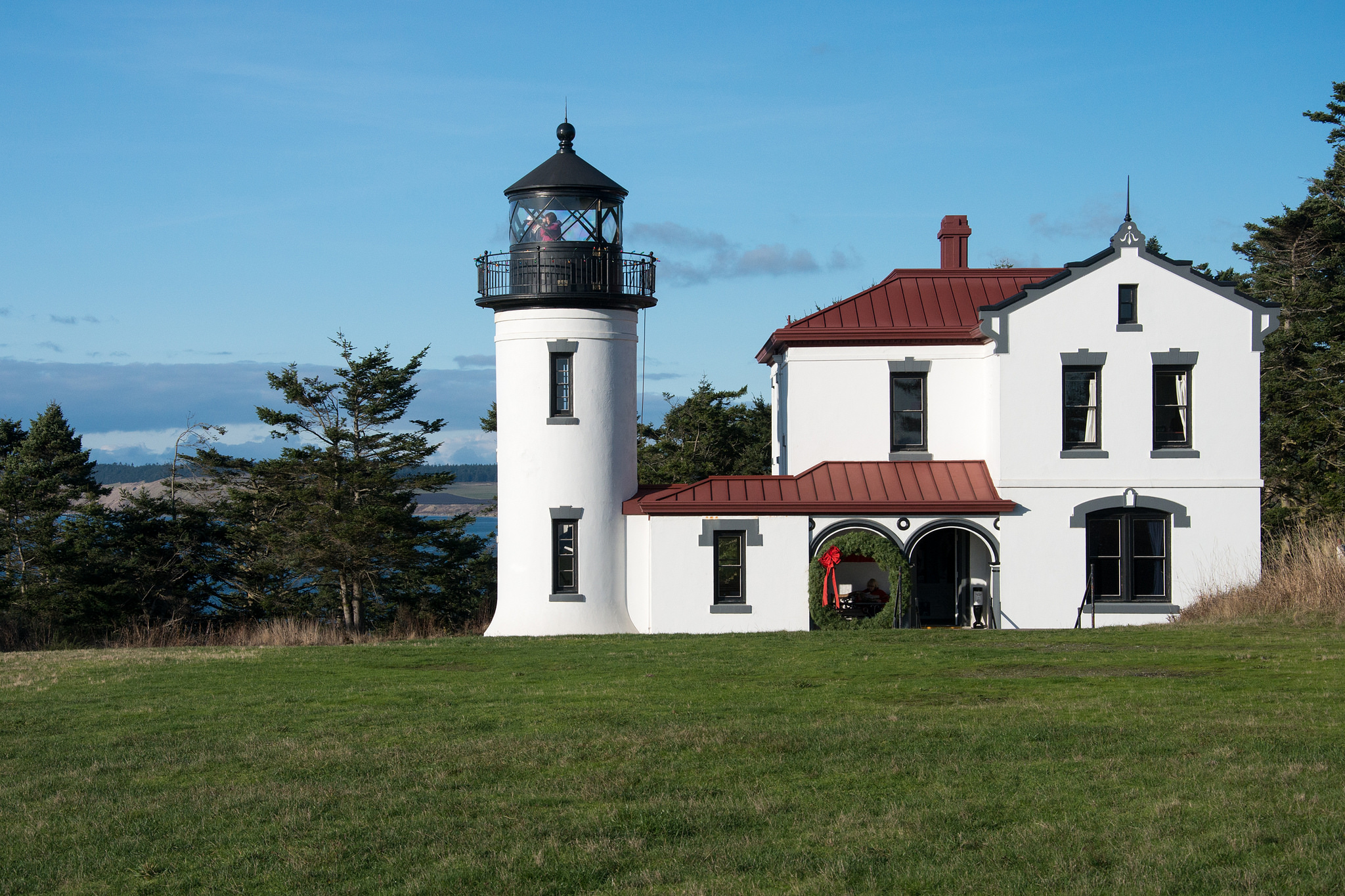 Admiralty Head Lighthouse, situated at Fort Casey State Park, stands along the western coast of Whidbey Island, an authentic getaway at a short distance from Seattle. The lighthouse stands on miles of wide open beaches from where you have sweeping views of the Puget Sound and where you find perfect spots to fly a kite. Exhibits at the Admiralty Head Lighthouse museum tell the history of the lighthouse and the area around Fort Casey State Park. If you have children who like to play pirate or soldier, then this is a great place to go, as the park displays four historic guns that can be explored with guided tours. 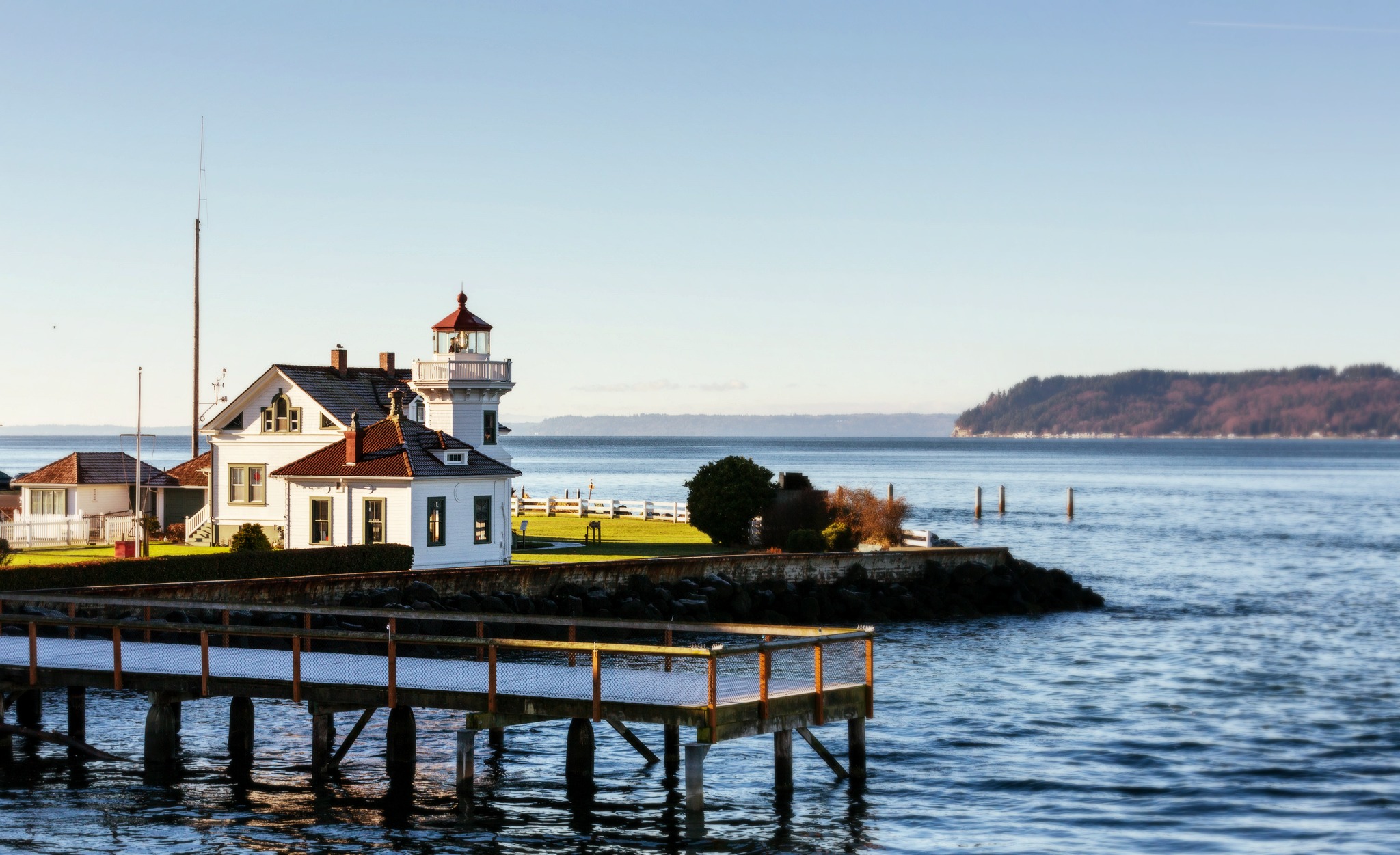 Mukilteo, located right in downtown Mukilteo, is one of the most charming and well-kept lighthouses in Washington. Mukilteo, a local Indian word for “good place for camping,” is a working lighthouse; its light diffuses more than 12 nautical miles out at sea and flashes once every five seconds, day in day out, all year long.

At Mukilteo visitors have the opportunity to climb to the top of the tower and visit the informative exhibit about the days of yore.

Every year in September the free Mukilteo Lighthouse Festival takes place (8-10 September 2017), with plenty of activities for young and older, lots of music, and fireworks. At the tip of Alki Beach, in West Seattle, you’ll find the Alki Lighthouse. Originally inhabited by Indians, this little light marks the place where in 1851 the first pioneers landed and formed a colony, which later grew out to the city of Seattle. Much of the old Alki Point Lighthouse equipment has been preserved in good condition for the public to view. Visitors can also climb the tower of the Alki Point Lighthouse to the top for a very spectacular view of the Seattle area. After your visit, you can relax on the beach or have a picnic on the lighthouse grounds. 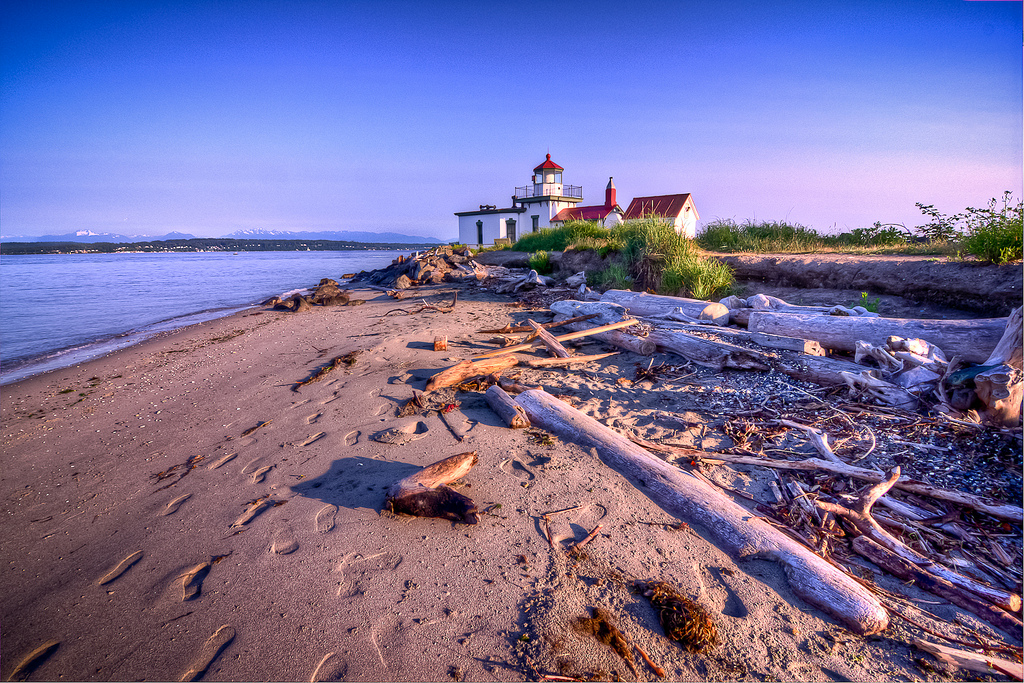 West Point Lighthouse is located in one of all time favorite park destinations in Seattle, Discovery Park. The site is one of incredible majesty and has a bit of everything: beautiful trails and paved paths for walks or bikes, great spots for picnicking, stunning views of the Puget Sound and a nice beach with the working West Point Lighthouse. West Point still sends out alternating red and white flashes, but a new beacon has taken over the function from the historic Fresnel lens that is still mounted in the lantern room. 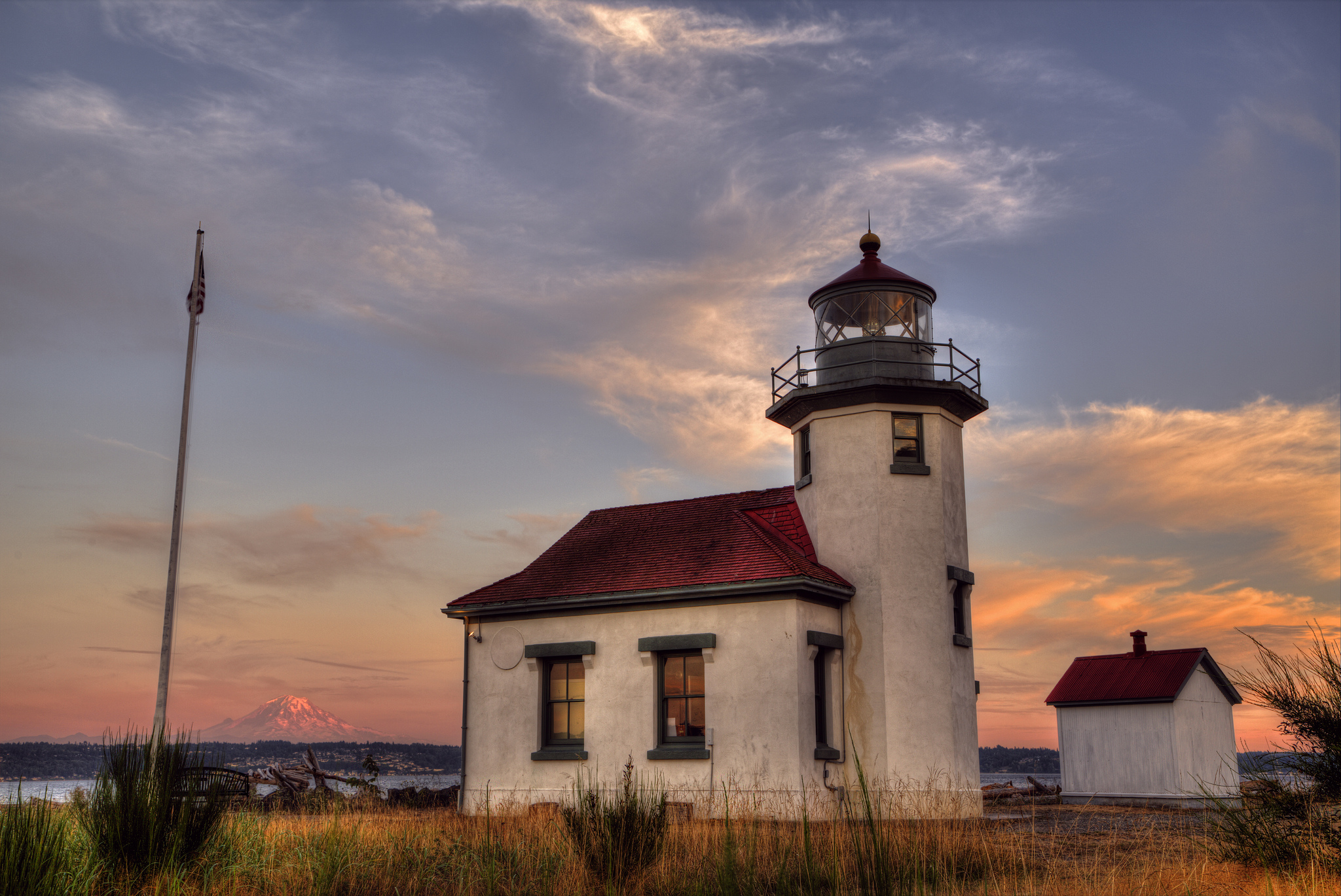 Featured in the marvelous children’s Christmas story, “The Red Ranger Came Calling,” Point Robinson Lighthouse stands on a sandy beach on the northeast corner of Maury Island. This pretty and small lighthouse marks the halfway point between Seattle and Tacoma and offers splendid vistas of Mount Rainier and Puget Sound. If you can’t get enough of this beautiful light or want to experience living 24/7 in a lighthouse on a remote island, you can rent the Keeper’s Quarters and watch the ships pass from the comfort of your very own little front porch.

Nice fact: The famous red bicycle that makes an appearance in the Red Ranger book, is still there, you can see it (stuck in a tree) in the woods nearby the lighthouse.