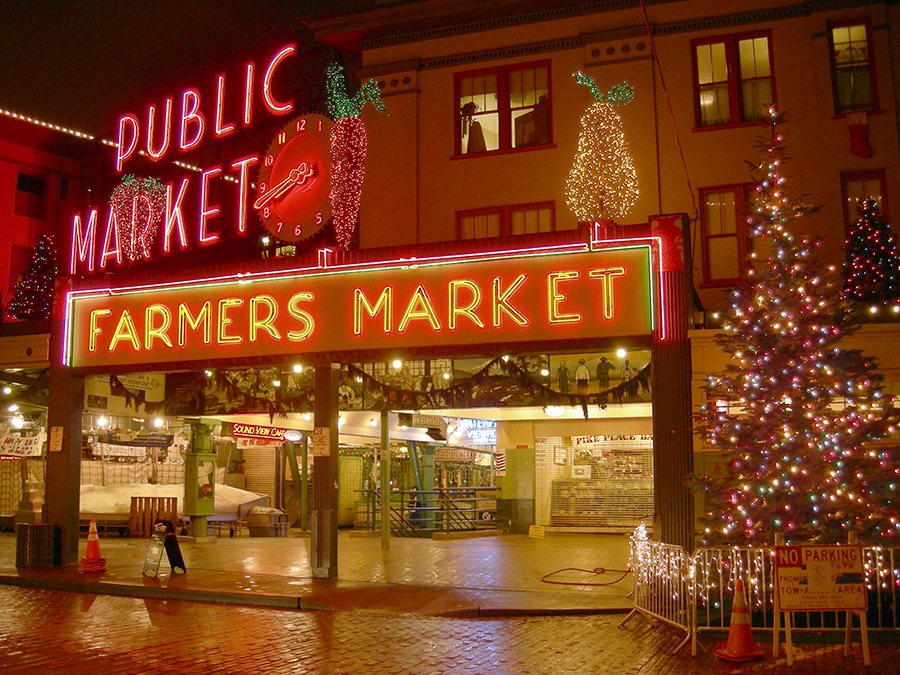 We know, it definitely feels like it’s way too early to mention Christmas, but with Thanksgiving in just a couple of weeks, before you know it, those trees will be up and decorated. And, one of the best parts of the holiday season is all of those dazzling lights. As it all gets started around Thanksgiving weekend, now is the time to start planning which displays you’d like to see, and perhaps even book a tour that might reveal hidden gems you didn’t know about too.

This holiday celebration at Seattle’s famous public market will feature a special tree lighting on November 25 at 5 p.m. Santa himself will lead the countdown to the lighting, when the 20-foot tree comes to life and the entire market is lit up in Christmas glory. The event, which kicks off at 11 a.m. that day also includes meeting Santa and taking free photos, cookie decorating, festive performances by live musicians, and the chance to purchase hot cocoa, cider and other beverages as well as purchase seasonal foods and locally made gifts.

This annual holiday lights show features wild animals and exotic destination scenes that are illuminated by over 600,000 LED lights, starting November 25 and running through New Year’s Day. Santa visits every Friday through Sunday during the event, offering the chance to say and get a picture taken too. Adults can enjoy the holiday wine and beer garden, and there will also be a special night ride on the carousel and the chance to get up close to reindeer, and who knows, maybe some of the famous reindeer that pull Santa’s sleigh will make an appearance.

The Point Defiance Zoo & Aquarium also hosts ZooLights in a stunning show running November 25 to January 1 that includes over a half-million LED lights, with everything from scenes featuring Mount Rainier, to the 12th Man Seahawks tree and a happy polar bear family all lit up. There’s also evening carousel and camel rides, and the chance to see a number of live creatures like meerkats, goats and sea creatures.

Country Village Bothell begins its annual holiday light display on November 12, held daily through Christmas Eve. It includes a colorfully lit 40-foot sea serpent, giant dragonfly, fiddling pig and marching ducks. Santa arrives on December 3rd, the day that also features a traditional tree lighting, caroling, a gingerbread house display and, of course, visits with Mr. Claus as well, who will arrive on a float at  7 p.m. that evening to light the tree and hand out candy canes. Live reindeer will be there too – we just know Rudolph or Dasher has to among them somewhere.

A number of Puget Sound neighborhoods htsave become famous for their light displays, you can find them in Queen Anne Hill around the Kerry Park Viewpoint which offers panoramic views of the historic homes all lit up for the holidays, and at Olympic Manor just north of Ballard. The Timberline neighborhood in Sammamish is a great one too, with residents really going all out.

Festival of Lights at The Grotto, Portland

In December, a half-million lights transform The Grotto during Portland’s Festival of Lights. It begins the Friday after Thanksgiving, November 24th in 2017, and runs through December 30th. It also includes caroling, choral performances and a petting.

ZooLights at the Oregon Zoo, Portland

Portland’s renowned zoo will also host ZooLights from November 25 through January 1. Kids can take a magical train ride through the zoo that’s decked out in more than 1.5 million colorful lights.

Peacock Lane has had a tradition for nearly a century of decorating all of its magnificent Tudor homes. Each and every one is spectacularly lit up for the holidays. It’s best to walk rather than drive to enjoy them, as vehicles are banned on certain nights to make it more pedestrian-friendly.

For the ultimate holiday experience, join the four-hour Christmas Light Tour offered by America’s Hub World Travel & Tours. Offered every day between December 1 and December 31 other than Christmas Day departing at 3 p.m., you’ll learn about the city’s history and current events while walking the sparkling oak and elm lined streets. It includes the chance to celebrate Christmas traditions through A Very Portland Christmas at the Pittock Mansion, the City of Portland Christmas Tree at Pioneer Courthouse Square, and The Christmas Festival of Lights at the Grotto.

In Idaho, visitors and locals can take the highly acclaimed Winter Nights Christmas Lights Tour. You’ll hop onto a comfy premium coach for a party bus tour that includes some of Treasure Valley’s best light displays choreographed with matching holiday tunes. It’s available December 1 to December 31, with the exception of Christmas Day, from Boise Party Bus.