Best Spots to Spend New Year’s Eve in the Northwest 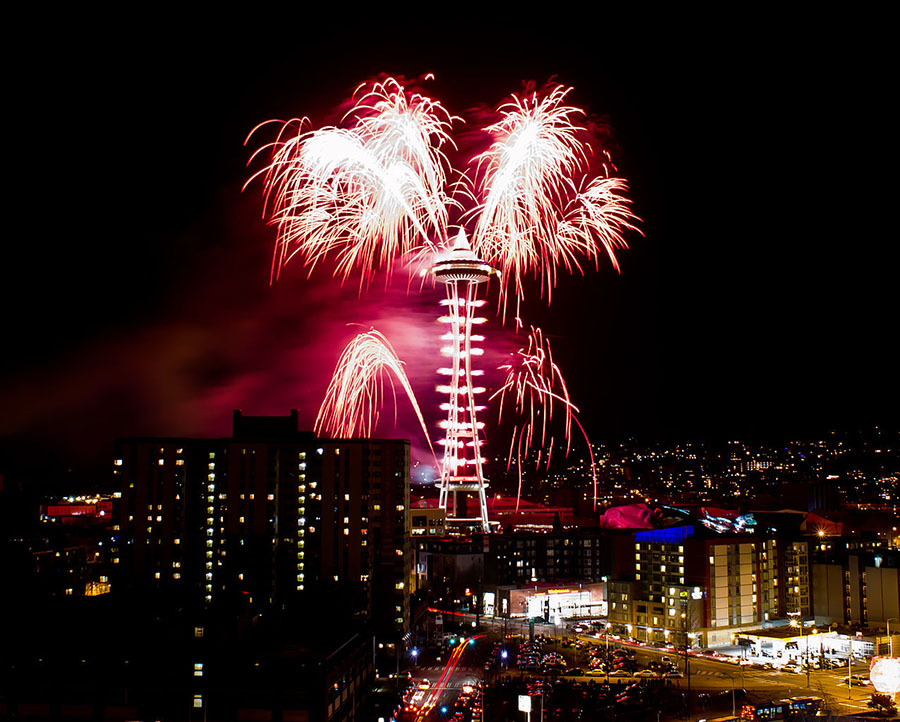 If you haven’t made your New Year’s Eve plans yet, it’s time to get going on that before you end up having to stay home and watch all the festivities on TV. While that can be fun too, these spots around the Northwest offer some spectacular celebrations that make it well-worth getting off the couch and out of the house.

The Emerald City’s annual fireworks display for New Year’s Eve has been ranked among the very best in the entire country. This much-anticipated event features over 10,000 firework shots and 2,000 firework devices that are set up in some 60 locations, and on three levels of the Space Needle. One of the very best views can be found on the iconic landmark’s observation deck. Guests can attend the dance party that starts at 9 p.m., or enjoy an entire evening of celebration that includes a six-course dinner at Sky City, its rotating restaurant. Both events last until 1:30 am and include a champagne toast at midnight, as well as fantastic views of the breathtaking light show.

You can also watch the show from the water, which guarantees an unobstructed view. Argosy Cruises are positioned right in the middle of Elliott Bay, and depart from Pier 55 along the waterfront. Waterways Cruises offers a three-hour cruise on Lake Union and Lake Washington with a Champagne toast at midnight, appetizers and desserts, full-service bar, DJ and dancing, party favors and views of the fireworks too.

Yet another option for an obstructed view of the fireworks show is offered at the Pacific Science Center. It will include music by KEXP DJs Evie, Michele Myers, Chilly and Larry Rose. It also features live science demonstrations, cocktails, craft beer and select wines. 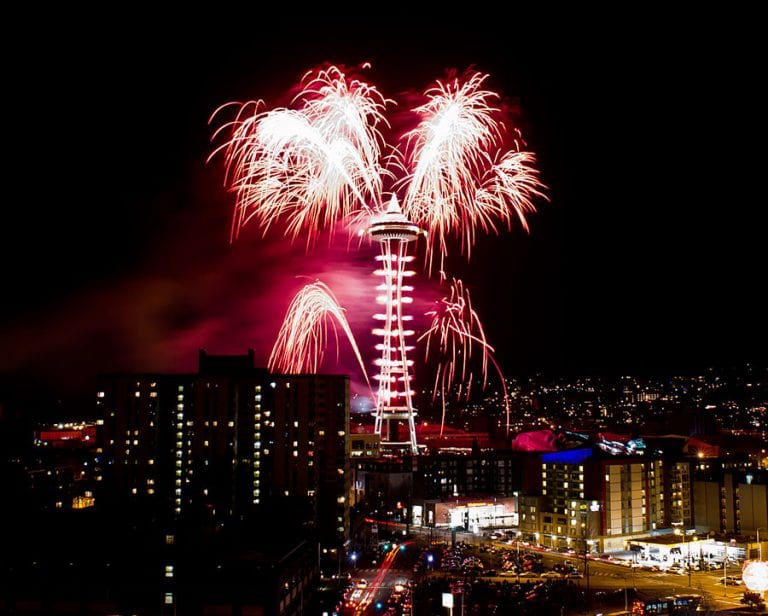 Tacoma celebrates the end of the year and the beginning of the new one with the First Night Tacoma New Year’s Eve Festival. The event is held in the Downtown Tacoma Theater District, and includes both outdoor and indoor activities from early evening until midnight. It all starts with a parade, which is followed by a wide range of entertainment and music performed on multiple stages. Ice skating, museum tours, special races, a kids’ tent and a fireworks display are all included too.

You can watch a spectacular fireworks show at midnight over the Pacific Ocean by heading to the boardwalk in Long Beach.

If you’re on the east side of Washington, the biggest annual event of the year in Spokane is downtown’s First Night Spokane, a huge celebration that includes live dancing performances, a 5K race along the waterfront, ice carving, ice skating, bonfires with hot chocolate, carousel rides and more. It all ends with a big bang: a stunning fireworks display and New Year countdown.

While the city of Portland doesn’t host much in the way of an official New Year’s Eve celebration with fireworks, by heading to Mount Hood you can enjoy the annual Ski Bowl New Year’s Eve Extravaganza. It includes DJ music, a dance party, a torchlight parade, winter games and two different fireworks displays, including the big show at midnight, accompanied by a champagne toast. 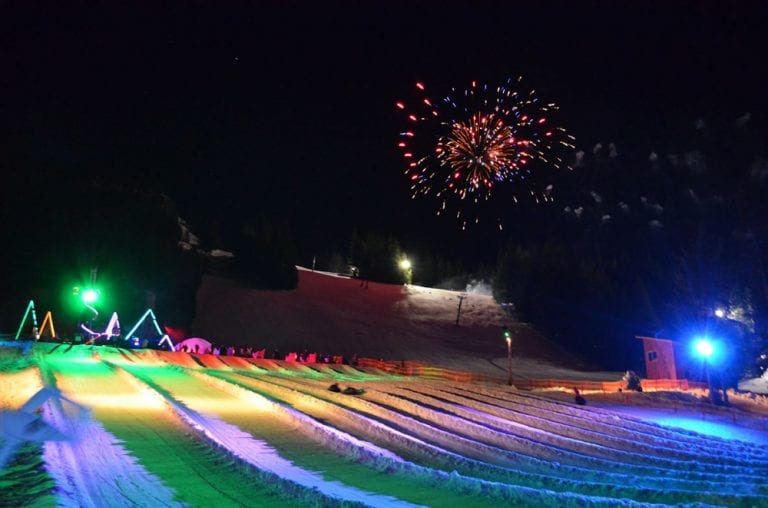 Just about every McMenamins property will be hosting a New Year’s party, which means no matter where you are in Oregon, a celebration isn’t too far away. They include everything from big-name concerts to smaller festivities, most featuring live music and champagne.

The last night to see the famous dazzling lights on Peacock Lane is New Year’s Eve, and it’s open until midnight. It makes a fun family-friendly option for enjoying the last day of the year with lots of old-fashioned holiday spirit. The homes are adorned with not only an impressive array of sparkling lights, but nativity scenes, rotating Christmas trees and incredibly life-like replicas of Santa and Frosty. 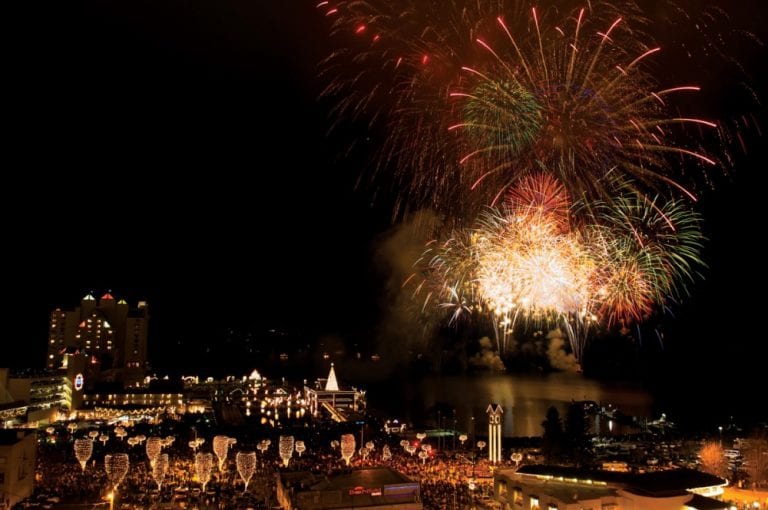 Choose this beautiful lakeside city to celebrate 2017 and the coming year, and you’ll have lots of great options, from a masquerade ball, dessert cruise and party cruise to a spectacular fireworks show. The resort hosts the Rock the boat New Year’s Eve party with live DJ, dancing, ice luge, champagne and a great view of the fireworks, and The Resort Convention Center will be putting on one of the biggest New Year’s Eve parties in the region. It includes a buffet dinner, live entertainment, costume contest, Facebook photo contest, prizes and a New Year’s Champagne Toast at Midnight.

In Boise, it’s all about the potato, and the annual Idaho Potato Drop has been promised to be bigger and better than ever. It includes a fireworks show, live music, games, and more. KTVB will be there interviewing “Spec-Taters” and live broadcasting everywhere from the all-new “Tuber Luge” to the McCall Winter Carnival ice sculpture pre-show in Capitol Park.