12 Covered Bridges to Tour in Autumn 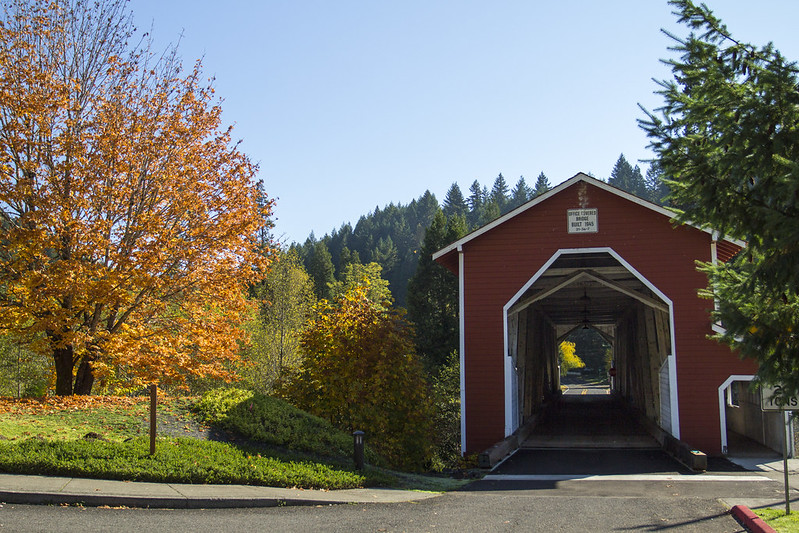 Autumn is a perfect time to view the bridges – there is just something special about coming across an old bridge set among fall foliage. For the optimal viewing during the peak of Autumn colors, visit between the 2nd week of October to the 1st week of November. The native trees turn golden, the creeks underneath the bridges are beginning to run full with autumn rain, and history seems at is finest in the waning days of Autumn.

The Pengra is a 120′ truss bridge over Fall Creek. The name of the creek is appropriate for there is no better setting for a covered bridge as it is in late October. Located on Place Road, the bridge was built in 1938 replacing an earlier 1904 bridge, and was refurbished in 2015. The bridge was named after B.J. Pengra, a pioneer who worked surveying the new state of Oregon in 1862.

The Parvin bridge dates to 1921, replacing a bridge that was built even earlier in the 1880s. It was named after the Parvin family who had homesteaded in the area as early as 1850. The 75′ bridge crosses Lost Creek. The location offers an interesting variety of names belying the beautiful area, as you will travel on Rattlesnake Rd, Pleasant Hill, and Lost Valley Lane.

Located in Marcola on Paschelke Rd, the Ernest (sometimes alternately spelled as “Earnest”) covered bridge was originally called the Adams bridge, then was renamed the Ernest bridge in honor of local residents when it was rebuilt in 1938. The bridge’s claim to fame includes being featured in the movie “Shenandoah” with some alterations to make it look more Civil-War era. The movie was filmed throughout the Mohawk Valley and the bridge crosses the Mohawk River. It is on the National Register of Historic Places.

Built in 1925 to replace an earlier 1876 bridge which was part of the Overland Stagecoach Route through the town of Drain, which at the time was one of the main routes to the Oregon Coast. Some of the timbers used in the reconstruction may still date to the 1876 bridge and there is still some question whether the bridge was a replacement or just a refurbishment in 1925 which could bring it up to “oldest covered bridge in Oregon” status. In 1987 the bridge was relocated a few hundred feet downstream to its present location in a city park and is now a pedestrian only bridge, still showcasing its faded glory beauty.

A unique feature of the Unity Bridge is a full length open window on the east side designed to help motorists see oncoming traffic at the nearby intersection. The 90′ bridge crosses over Fall Creek on Jasper Lowell Road. It was built in 1936 to replace an earlier 1890s bridge, and has been refurbished three times since. On a winding road that brings you from Dexter Reservoir, the covered bridge makes an easy destination for relaxing drive through scenic countryside.

Also called the West Fir bridge, in West Fir OR, the Office Bridge is the longest covered bridge in Oregon at 180′. Built in 1944 by the West Fir Lumber Company, it spans the north middle fork of the Willamette river. It has a unusual covered walkway attached. It is now part of a public park and the centerpiece of the town’s annual Bridge Lighting celebration in December. If you can’t make it in the fall, the bridge is especially striking in the winter set against frost-covered hills.

This 1938 bridge is short but sweet. Found in Marcola, OR, the bridge is just 60′ long and just 1.8 miles from the Ernest Covered Bridge. Named after local lumber mill owner George Wendling, it is now on the National Register of Historic Places. It would be fun to go back in time and see the interior when it used to be plastered with colorful circus posters.

On Layng Road in Cottage Grove, OR, the Mosby Creek Bridge is the oldest in Oregon, built in 1920. It is placed next to the primary trail head to the Row River Trail which offers the best access to the iconic orange bridge seen in the opening scenes of the movie “Stand By Me” filmed in the area. The 90′ truss bridge was named for the 1853 pioneer David Mosby who had a 1,600 acre land claim in the area. Set in its original location, the old bridge looks perfectly at home.

This Cottage Grove, OR bridge is the only covered railroad bridge west of the Mississippi. At 78′ long and spanning the Coast Fork of the Willamette River, this bridge was built in 1925 to carry rail traffic hauling logs to the nearby lumber mill. After the mill burned down in the 1950s, the train tracks were pulled up and only the bridge remained. In 2010 it was dismantled and completely rebuilt in the same style and is a photogenic pedestrian only attraction.

The Lowell bridge is the widest in Oregon and has an unusual history. Once the site of a ferry across the river, a bridge was built in 1907 and named after the nearby city of Lowell, itself named after the founder’s birthplace of Lowell, Massachusetts. Following a major accident, the bridge had to be rebuilt in 1945 as well as raised up 6 feet when a dam was built nearby threatening to overwhelm the bridge. Again in 1979 the bridge was damaged severely by a construction vehicle working on the bypass concrete bridge. The roof was rebuilt again and has seemingly survived unscathed to this day. The little bridge that could has withstood a lot and is on the National Register of Historic Places.

The Currin bridge is a Howard truss bridge on Layng Road in Cottage Grove, OR. The uniquely colored bridge is two-toned for the best of both worlds and sets it apart from others in the area. It is the only two colored bridge in Oregon. It was built in 1925 to replace an earlier bridge built in the 1880s and named after a local family. It is closed to vehicles, so you can get out and take your time exploring the interior.

This 105′ bridge crosses the Row River near Dorena Lake and makes for a lovely Autumn drive just over 10 miles outside of Cottage Grove. It was built in 1949 and is now a pedestrian-only bridge. It has open side windows making it a popular place for photography.

Note: Following the tragic wildfires of September 2020, the covered bridges up the McKenzie Pass may have been damaged or lost. The Belknap Bridge did not survive the wildfire although the iconic Goodpasture Bridge appears to have been spared.